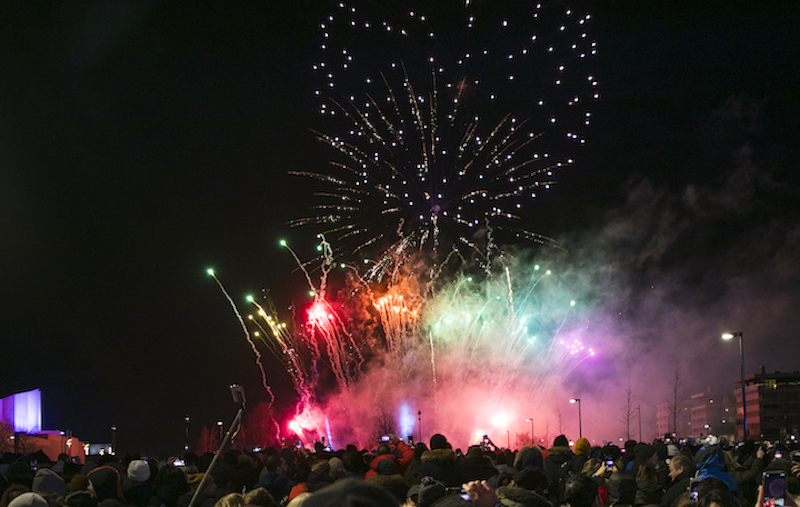 The last time new years was celebrated at Kansalaistori in Helsinki in 2019. Photo: Anniina Nissinen

After two exceptional years, the turn of the year will once again be celebrated together at a grand event at Kansalaistori. The festival-goers will be entertained by top Finnish artists Isac Elliot and Cledos with guests. There is programme for all ages, and the night ends with fireworks. The event causes exceptional traffic arrangements.

The New Year’s Eve celebrations kick off at 5:30 p.m. with Skidit Pakkasdisko, a children’s disco that makes the entire family dance. MC New Ro, DJ Orkidea, the young dancers of StepUp School and the Galante choir, among others, guarantee a party atmosphere. The early evening programme climaxes with a children’s fireworks show at 6 p.m.

The late night concert’s warm-ups begin with promising artist Vera Wall at 10:15 p.m., followed by DJ duo Paha Vaanii entertaining the party people with Finnish music until the night’s star performers come on. The main concert kicks off with Emma award-winner F and artist on the rise Hassan Maikal, followed by a New Year’s greeting from Mayor Juhana Vartiainen. The main act for this year’s concert is a rare joint gig by Isac Elliot and Cledos. The masterminds behind some of the most listened songs of the year take their show to exceptional heights with an impressive group of featured artists, including, for example, william and DAVI as well as a surprise performer. The night is crowned by fireworks that fill the sky above Helsinki with colour.

The New Year’s Eve concert hosted by Emma Karasjoki and Gogi Mavromichalis, the fireworks and audience interviews are broadcast live on Yle TV1 and Yle Areena from 10:50 p.m. to 12:30 a.m. After the fireworks show, the party continues at Kansalaistori with DJ duo Paha Vaanii playing music until 12:30 a.m.

The event causes exceptional traffic arrangements in the vicinity of Kansalaistori from 10 p.m. until 2 a.m. Mannerheimintie will be closed between Eteläinen Hesperiankatu and Arkadiankatu, some bus stops on Mannerheimintie and the Elielinaukio bus terminal will be closed, with bus traffic diverted to Kamppi. More detailed public traffic arrangements by line can be found on HSL’s Journey Planner and website: www.hsl.fi.

Helsinki’s New Year is organised by the City of Helsinki. The traditional event has been held
since the 1930s. The event is produced by the Helsinki Events Foundation.