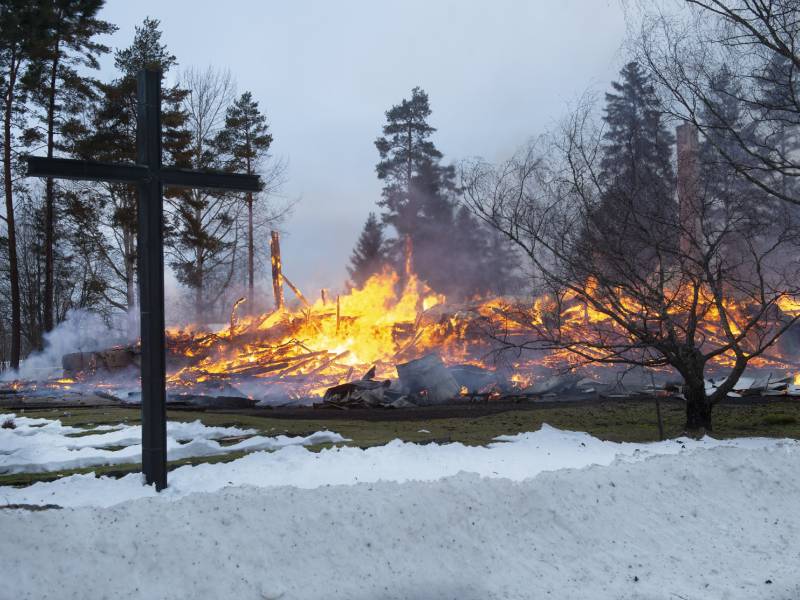 The burning remains of a church in Rautjärvi, Southern Karelia, on 25 December 2022. The fire that devoured the over 140-year-old wooden church was set during the morning service on Christmas Day. (Ari Nakari – Str / Lehtikuva)

AN ELDERLY MAN is tentatively suspected of setting a church on fire in Rautjärvi, South Karelia, on Christmas Day.

The church was set on fire during the morning service and was destroyed completely in the fire. Everyone inside the church was able to exit the building through the two side doors and vestry in spite of ropes that had been tied to two of the doors in what police believe was an attempt to prevent people from exiting.

“There was no way you could go out through the main door at that point. Smoke was coming in through the cracks,” recounted Kari Luumi, a former local vicar who attended the service, recounted to Helsingin Sanomat.

Built in 1881, the wooden church was devoured completely in the fire.

Saku Tielinen, the officer heading the pre-trial investigation at Southeastern Finland Police Department, confirmed to Helsingin Sanomat on Tuesday that the fire is believed to have been set by an elderly man who was later found dead on the premises of a burnt down detached home located about 30 kilometres from the church.

Authorities were notified about the second fire roughly two hours before the first, at 10.23am.

Police continue do encourage people to report any sightings of the suspect, described as a 60–80-year-old man wearing black rubber boots, black pants, a brown jacket and a blue-and-white knit cap.

“We’re looking into the man’s possible involvement in the incident, but we have no definitive evidence that it was he who started the fire. It’s like, though, that the temporal link between these two fires isn’t a coincidence. All signs point in that direction,” he commented to the daily newspaper.

Locals interviewed by the newspaper described the man as a hermit.

While the investigators estimated already last weekend that it is possible that the fires are connected, they have yet to rule out other lines of investigation.

“All lines of investigation are still open. We’ll gladly welcome tips that deal with other things than the elderly man,” said Tielinen.