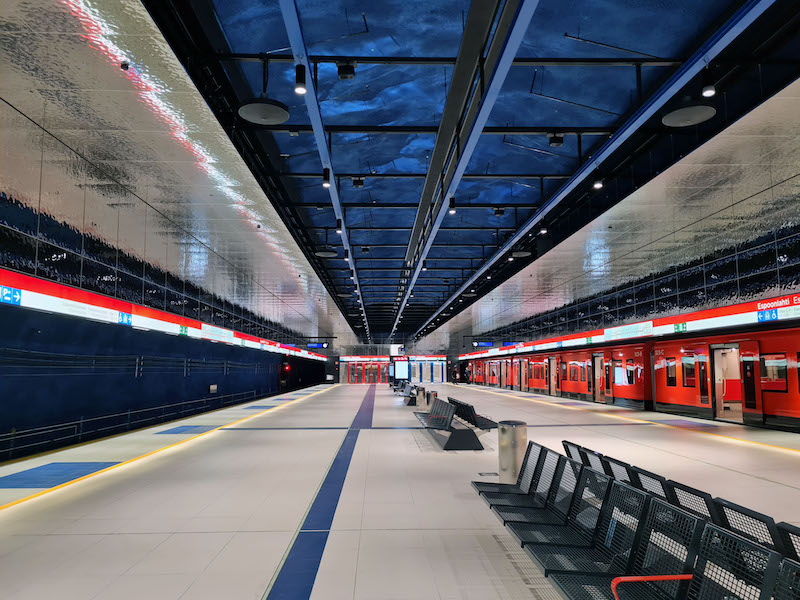 The extension from Matinkylä to Kivenlahti includes five new stations. The photo is from Espoonlahti. Photo: City of Espoo

The new metro extension from Matinkylä to Kivenlahti opens on Saturday 3 December. The metro brings many new opportunities to Espoo and ensures that the city will maintain its vitality.

The metro serves residents by improving transport connections and attracts housing, services, jobs and innovation clusters to areas close to the tracks.

“We are not just building the metro but also everything that it makes possible,” says Espoo’s Mayor Jukka Mäkelä.

Mäkelä mentions the European Capital of Innovation Awards (iCapital) as an example of the opportunities created by the metro. The City of Espoo is one of the finalists in this year’s competition, alongside Marseille and Valencia. The winner will be announced on 7 December.

“The metro has enabled the development of the Otaniemi science community and the Aalto University campus, on which the joint innovation story of Aalto, VTT, businesses and the city is based,” Mäkelä adds.

After the metro starts running all the way to Kivenlahti, it will be easier to reach Espoo’s various cultural and sports services. The metro does not only take people from Espoo to Helsinki but also from Helsinki to Espoo.

The metro has also affected transport within Espoo. For example, the metro line offers a connection between the Greater Espoonlahti area and the major workplace and campus area in Keilaniemi and Otaniemi.

The Espoonlahti centre is one of the most important development areas in Espoo. The long-term goal is to build a dense and lively urban centre with housing and an extensive selection of services.

The previously completed section of the West Metro from Ruoholahti to Matinkylä has been of enormous importance to Espoo. The metro attracts businesses and innovation clusters. It also plays a key role in the development of the international campus area in Otaniemi.

Construction along the metro line will continue for years

According to population projections, the number of residents in the area around the metro extension will grow by approximately 22,000 people by 2031. Thanks to the metro, the entirely new Finnoo residential area is being built in Espoo.

Existing residential areas close to the metro stations will become more densely built-up. The old Kiviruukki industrial area on the northern side of Länsiväylä will be an integral part of Kivenlahti. It will develop into an urban residential, school and workplace area and be the home of Cleantech Garden, a nationally and internationally unique bio- and circular economy innovation cluster.

“Construction will not end when the metro extension is completed. It will continue for years. Some of the projects are already underway, while others are still in the planning phase,” says Olli Isotalo, Deputy Mayor for Urban Environment.

The metro will enable economically and environmentally sustainable urbanisation far into the future. Densely built-up areas around the stations and the surrounding low-rise residential areas offer a variety of housing options for people of all ages. As the metro is underground, it allows for efficient land use above ground.