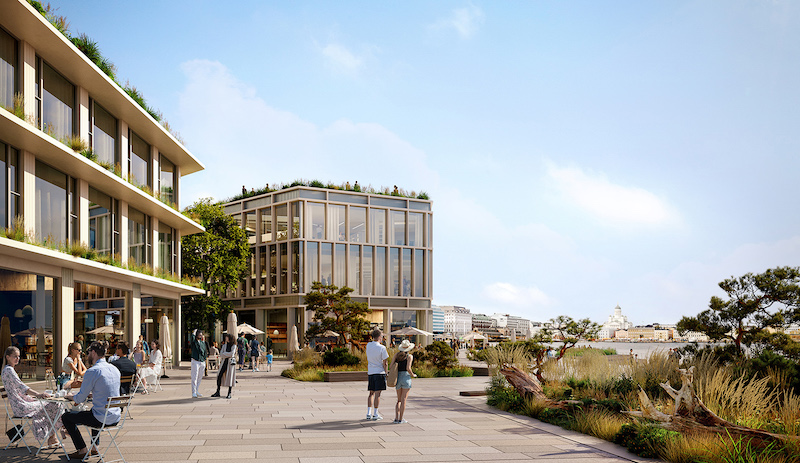 The entry Saaret by the Konsortium Gran team won the international quality and concept competition to develop the Makasiiniranta area in Helsinki's South Harbour. The jury found that the winning entry is creditable in terms of cityscape and architecture and that it is a balanced extension to Helsinki's maritime downtown area.

In May 2021, the City of Helsinki launched a competition to find a partner to develop the Makasiiniranta area in the South Harbour. The area will be developed as part of the pedestrian city centre and the seaside trail around the shores of Helsinki, and as a location for the new Architecture and Design Museum.

The winning entry is Saaret by the Konsortium Gran team. The winner was selected from among the four entries that made it to the competition's second stage. The competition, which also attracted international attention, promoted discussion on the topic and encouraged residents to take active part in the development. In the two interactive stages of the competition, residents submitted more than 2,000 comments on the entries via the Voice your opinion service.

"Our main goal is to make Makasiiniranta a valuable maritime area for recreation for both locals and visitors. Residents' participation and public discussion during the various stages of the competition have been a key part of the competition and the jury's work," says Mayor of Helsinki Juhana Vartiainen, praising the residents' involvement.

The winner met the high criteria, resulting in a balanced plan

Due to the valuable nature and cultural and historical context of the target area, the competition was highly demanding. The competitors were tasked with resolving how to reconcile new construction with the valuable environment and how the future looks for the protected buildings in the area – the Old Market Hall, the Olympia Terminal and the Satamatalo building.

The designs also needed to figure out how to turn the area into an attractive and functional one and how the maritime area opening up from the shore will look, with its seaside trail. With regard to Helsinki's carbon neutrality targets, the solution had to be based on climate-smart and sustainable construction methods.

The winning entry selected by the jury, Saaret, was considered creditable in terms of cityscape and architecture. It also makes a balanced extension to Helsinki's maritime centre. The winning entry respects the historical values and cultural environment of the area while also bringing a new unique layer to the national landscape.

It was seen as an advantage for the winning entry that it connects to the city structure of the surrounding districts of Kaartinkaupunki, Ullanlinna and Kaivopuisto. Furthermore, it cleverly emphasises the views opening up to the landmarks and maritime scenery of the city centre. The plan includes high-quality landscape architecture and intertwines with other parts of the area, introducing new public outdoor spaces for people to enjoy.

Makasiiniranta will have a pleasant set of coastal squares to complement the seaside trail around Helsinginniemi cape. Laivasillankatu street will become an urban street space with squares and views opening up to Uspenski Cathedral and the Baltic Sea.

"The winner has a balanced functional concept. The restaurant, commercial and office premises and the hotel included in the new construction and the cultural venues planned for the protected Satamatalo and Olympia Terminal buildings will make the area attractive. Similarly, the new Architecture and Design Museum to be built in Makasiiniranta will attract even more locals and visitors to the area. Makasiiniranta will become more closely connected to the city centre. The winning plan will make it a busy and pleasant maritime area on the shores of the South Harbour," Mayor Vartiainen states.

The New Museum of Architecture and Design to be built in the area will combine the existing national museums on the two topics, the Museum of Finnish Architecture and the Design Museum. A separate design competition will be held for the museum building. The plan is to launch the competition once the decision on the museum's realisation is made in 2023.

All four finalists were awarded a prize

The teams behind the entries are:

The event for revealing the winner of the Makasiiniranta quality and concept competition was held at Helsinki City Hall on 24 November for the competitors and the media. The event could also be watched live in English on the Helsinki-kanava website. A recording of the event is available on Helsinki-kanava. In a few days, Finnish and Swedish subtitles will also be available for the English audio.