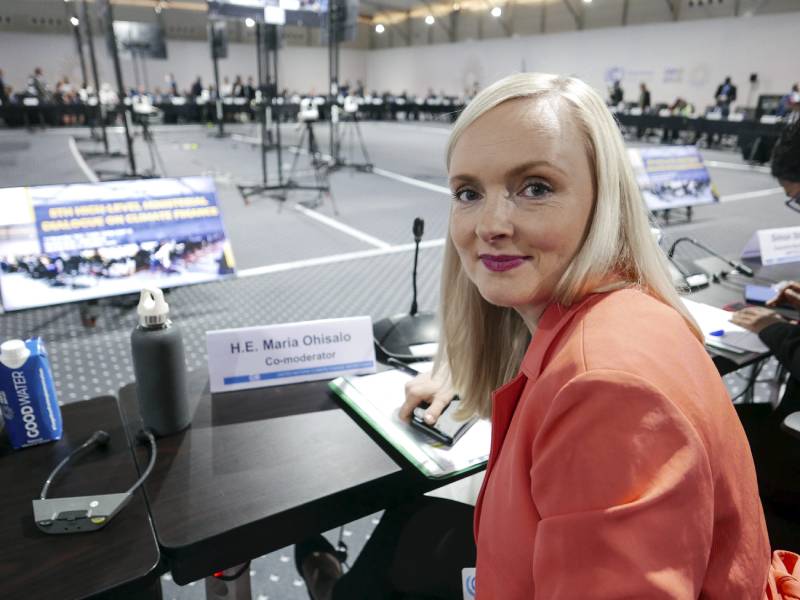 Maria Ohisalo attended a session of Cop27 in Sharm el-Sheikh, Egypt, on 16 November 2022. Ohisalo on Sunday expressed her disappointment with the outcome of the conference, warning that the window for limiting global warming to 1.5 degrees and avoiding the worst impacts of climate change is closing rapidly. (Riikka Lamminmäki – Ministry of the Environment)

THE OUTCOME of Cop27 can be described, in the kindest of terms, as a mixed bag judging by the statements delivered at the closing plenary in Sharm el-Sheikh, Egypt, on Sunday.

Rich nations signed off on setting up a fund to help vulnerable countries to cope with climate-related loss and damage, marking a historic breakthrough after three decades of calls for big polluters to acknowledge their responsibility for the climate emergency.

While the agreement was hailed as a step toward climate justice and remarkable achievement considering loss and damage was not even on the agenda at the start of the conference, many reminded that the fund must be designed, funded and operationalised before it can help countries bearing the brunt of the emergency.

Its importance is highlighted by lack of meaningful progress on emission reductions and overall ambition. World leaders failed to agree on language to phase down all fossil fuels instead of only coal and agreed, apparently only at the last minute, to reaffirm their feeble commitment to the 1.5-degree target.

“If we breach 1.5 [degrees], many small islands will no longer exist and those that do will no longer be a place we want to call home,” a Palau delegate reminded at the closing plenary early on Sunday.

“Egypt will not be a true victory if we roll back efforts to keep 1.5 degrees alive. For countries like Palau, it will mean that we’ve traded loss and damage – money we wish we didn’t have to ask for – in exchange for the true ability to remain in our countries and homes. And we don’t want that hollow victory.”

“We’ve traded loss and damage – money we wish we didn’t have to ask for – in exchange for the true ability to remain in our countries and homes. And we don’t want that hollow victory.”

Non-governmental organisations representing children and youth expressed their frustration with the failure to agree on a phase-out of oil and natural gas, calling attention to the presence of fossil fuel lobbyists at the conference.

“We urge you to phase out all fossil fuels despite the lack of ambition in this decision. Your actions speak louder than your words,” noted a representative of the official children and youth constituency of the UN Framework Convention on Climate Change, YOUNGO.

“We also have serious concerns that this outcome was influenced by the presence of over 600 fossil fuel representatives here at Cop27, who outnumbered the representation of the entirety of global civil society, children and youth. This unjust imbalance cannot be repeated at future Cops. We must have new mechanisms to prevent the risk of conflict of interest.”

Finnish Minister of the Environment Maria Ohisalo (Greens) voiced her disappointment with the outcome in a press release, warning that the window for limiting global warming to 1.5 degrees is closing rapidly.

“The decisions of the conference do not reflect this urgency,” she stated.

“The climate crisis is progressing, but some countries lack the willingness to move forward with accelerating emission reductions. When you do not reduce emissions quickly enough, the adaptation needs and devastation caused by climate change increases substantially.”

Marjo Nummelin, the chief delegate for Finland, echoed the criticism levelled at the hosts throughout the conference.

“Unfortunately, the work here was non-transparent and the views of parties were taken into consideration fairly selectively. This resulted in the meeting dragging on and several key aspects being watered down – far too late did we get to even discuss them,” she stated.

Reports from Sharm el-Sheikh indicate that lack of transparency left delegates at times unsure whether they were having the same discussion as others.

German Foreign Minister Annalena Baerbock viewed that an “utter failure” was avoided mostly due to a progressive trans-continental alliance despite “stonewalling and organisational shortcomings”.

“It is more than frustrating to see overdue steps on mitigation and the phase-out of fossil energies being stonewalled by a number of large emitters and oil producers,” she said in a public statement. “The industrialised countries and the countries hit hardest by the climate crisis were ready for [more binding commitments], but an alliance of […] oil-rich countries and major emitters has prevented this.”

There were some minor victories, too, at Cop27. The Guardian on Sunday highlighted that the cover decision is the first of its kind to mention ‘food’, ‘nature-based solutions’ and ‘tipping points’, as well as dedicate a section on forests.