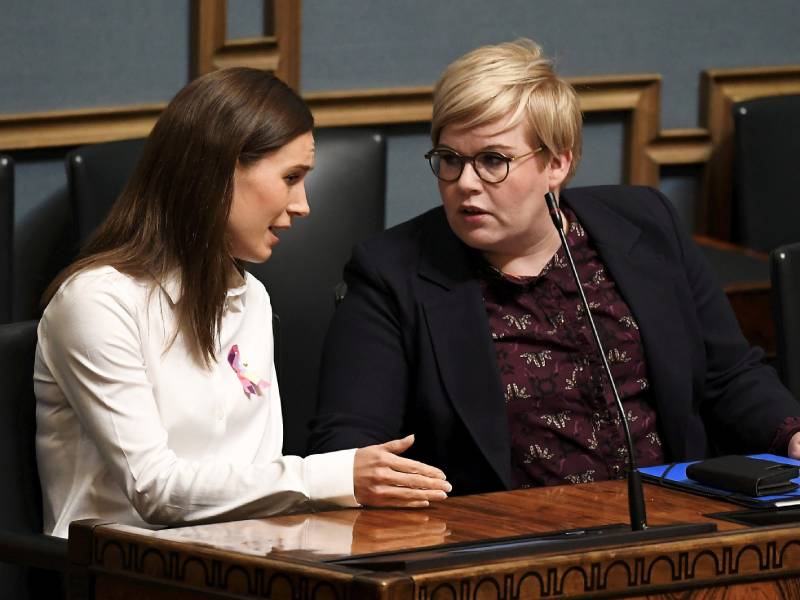 Prime Minister Sanna Marin (SDP) and Minister of Finance Annika Saarikko talked during a plenary session in the Finnish Parliament on 28 September 2022. Marin and Saarikko on Thursday responded to criticism levelled at the government’s continuing fiscal stimulus by the International Monetary Fund (IMF). (Jussi Nukari – Lehtikuva)

The IMF on Thursday recommended that the fiscal impulse be reversed next year in order to rein in the debt burden of the national economy and not to contribute to already significant inflationary pressures.

The reversal, it gauged, could be accomplished partly through better targeting energy support measures.

“This should be followed by a gradual, but well-defined and well-communicated medium-term consolidation plan based on measures identified in the comprehensive spending and tax reviews,” its concluding statement reads. “Structural reforms to boost long-term growth remain a priority, including changes to the collective bargaining system that would facilitate adjustment to shocks and retain a sufficient degree of coordination to safeguard competitiveness.”

Eurostat has released preliminary data indicating that consumer prices surged by 8.3 per cent in Finland in October. The rate of inflation is expected to be roughly seven per cent in 2022 and 4.5 per cent in 2023, according to the IMF.

The inflationary environment, in turn, is forecast to contribute to sluggish economic growth in the near term.

“The mission expects growth to be around zero next year, followed by a slow recovery and a return to a potential growth of slightly above one per cent,” said the IMF. “Higher energy prices (feeding through to inflation) and higher interest rates have already dented households’ purchasing power and confidence, but the full impact on consumption and the housing market is expected to be felt only in the first half of next year as mortgage rates are more fully reset, fixed-price energy contracts increasingly expired, and savings buffers slowly exhausted.”

Marin responded to the criticism in the Parliament House on Thursday: “If we compare to many other countries that have spent money during the pandemic or energy crisis, I’d say Finland has invested fairly moderately in society,” she was quoted saying by Helsingin Sanomat.

Saarikko viewed that the government has made largely successful decisions in the area of fiscal policy but stressed the importance of not allowing the crises to overshadow foundational problems in the Finnish economy.

“I’ve held on to the principle that next year’s measures against inflation should be temporary and carefully targeted. But it’s clear that these crises mustn’t overshadow permanent problems in the Finnish economy,” she was quoted saying at a news conference, pointing to issues such as population ageing, growing service demand and productivity development.

“This means that we can’t continue the same kind and extent of financial support we gave to households, municipalities and businesses during the pandemic during the current and possible future crises,” added Saarikko.

She highlighted that the measures adopted to support citizens to cope with rising energy prices this winter are temporary and targeted exclusively at those who genuinely need support.