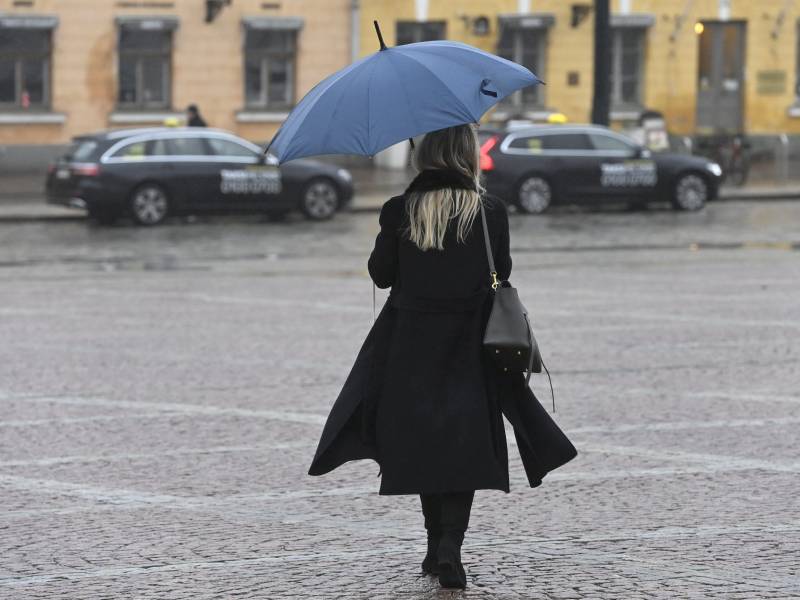 A woman with an umbrella on rainy Senate Square in Helsinki on Friday, 11 November 2022. Finland has to do more to market its strengths to skilled foreign labour given that its weaknesses are evident at a glance of a world map: the cold climate and proximity to Russia, an expert stated to Helsingin Sanomat on Saturday. (Heikki Saukkomaa – Lehtikuva)

FINLAND has to step up its efforts to both improve its international reputation and bring about a shift in public attitudes in order to attract the necessary number of foreign workers, view experts interviewed by Helsingin Sanomat.

“Finland’s country image is hardly as strong as we think,” commented Mikko Räsänen, an expert at the Confederation of Finnish Industries (EK).

Mari K. Niemi, a director at E2 Tutkimus, stated that the need for improvement is evident from the fact that many respondents to surveys conducted by the non-profit research organisation view that education and experience obtained overseas is belittled in Finland.

“In this regard, there was no difference in the responses of highly educated international skilled workers living in Finland and returning Finns. That’s an alarming message,” she said.

Mikko Valtonen, a senior specialist at Finland Chamber of Commerce, estimated that the country continues to lack the capabilities to market its strengths sufficiently while its weaknesses are clearly evident at a glance of a world map.

“The weaknesses are known more automatically. The cold climate and a 1,300-kilometre border with Russia,” he said.

With the Finnish population ageing and its structure shifting rapidly toward non-working ages, policy makers and business advocacies have called for increasing work-based immigration by as much as hundreds of thousands.

Saukkonen squashed such hopes, pointing to the fierce competition for skilled labour and the relatively low number of immigrants already in Finland.

“The idea is being repeated because people want to embrace it. We have no reason to believe we could get the kind of people to Finland who’d solve our problems. Problems linked to the dependency ratio in particular can’t ever be solved with immigration,” he argued. “Our competitive standing isn’t exactly great. If you compare the level of pay, Norway is a whole lot better. People make rational choices.”

The prospects are especially bleak for remote regions, according to Saukkonen.

“There isn’t one example in western countries where international immigration has fixed the population structure or labour shortage in a region that lacked dynamism and that people were leaving to begin with,” he said.

He also questioned whether there is an attitudinal readiness to welcome the required number of immigrants.

“I strongly doubt this,” he stated to Helsingin Sanomat. “As you’re already talking about the growing foreign-background population in near panic, what’d the discussion be if immigration was really at the desired level and what’d it mean in terms of challenges to the education and training sector?”

Räsänen of EK estimated that such concerns are valid.

Finland, he viewed, is indeed trailing other countries in terms of attracting international labour, having only started to discuss the issue more widely in the past couple of years. The OECD recently ranked the country 18th on its list of talent attractiveness, behind all other Nordics and Estonia.

Public attitudes are similarly of significance. Räsänen argued that it is difficult to have a hardline stance on humanitarian immigration all the while trumpeting yourself as a country that is open to work-based immigrants.

“A country has to be attractive to foreigners in general.”

“A country has to be attractive to foreigners in general,” he outlined. “It’s clear that the overall climate has to be international.”

Finland Chamber of Commerce’s Valtonen said Saukkonen’s interview may have offered an overly pessimistic view of the potential of immigration.

“I’m sure his thoughts are on a solid foundation in terms of work-based immigration not solving all problems related to the population structure and dependency ratio,” he said. “If we continue on the same path, I’m sure the impact will be modest. That’s why we’re placing emphasis on change that makes Finland more attractive and easier to come to.”

Both Valtonen and Niemi of E2 Tutkimus underscored the importance of making sure also the spouses of international recruits have job opportunities. Niemi also encouraged employers to consider whether Finnish skills are really an absolute requirement for all positions, reminding that foreign employees can have contact networks that more than compensate for the lack of language skills.

It is additionally important to recognise that not all international experts intend to learn the language and stay in the country until retirement age, according to her.

Surveys indicate that the courage to recruit from abroad often pays off, highlighted Helsingin Sanomat. Finland Chamber of Commerce recently reported that only five per cent of companies that have hired foreign workers, be it on a temporary or permanent basis, have had any negative experiences. Meanwhile about 70 per cent of companies reported to having positive or very positive experiences with foreign labour.