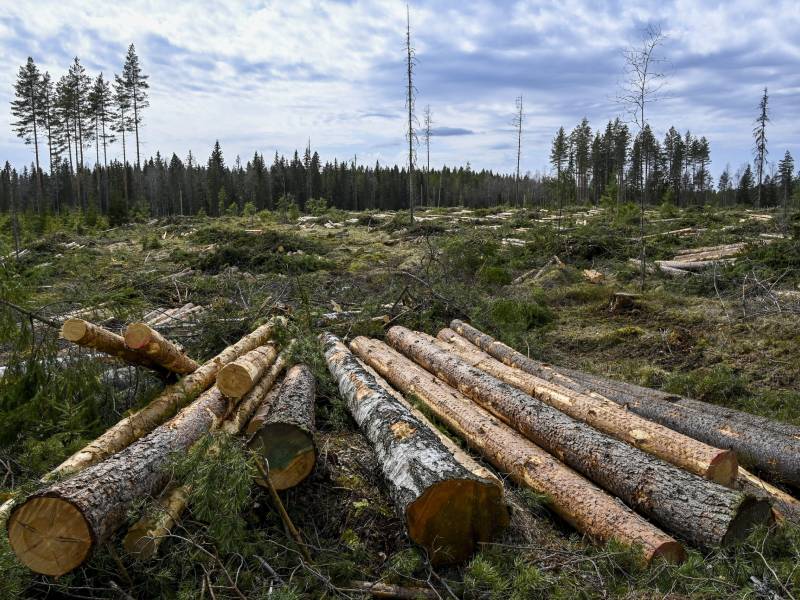 A logging site in Janakkala, Southern Finland, on 5 May 2022. High logging volumes have been identified as one possible reason for the land use sector becoming, for the first time ever, a source of emissions in Finland in 2021. (Markku Ulander – Lehtikuva)

EMISSIONS from Finland’s land use, land-use change and forestry sector exceeded the amount of carbon dioxide the sector can sequester from the atmosphere by 2.1 megatonnes in 2021, according to the latest annual climate report from the Ministry of the Environment.

The net sink of the sector, the report pointed out, sufficed to cover 48 per cent of emissions from effort-sharing and emissions-trading sectors in Finland in 2020.

While the climate report states that the country could just barely reach its goal of carbon neutrality by 2035, the task seems all the more challenging in light of the recent decline in carbon sinks that has been attributed to high logging volumes and slowing growth of forests.

“In terms of emissions, we are making progress towards a carbon-neutral Finland in 2035. In terms of carbon sinks, however, the situation is more difficult,” said Minister of the Environment and Climate Change Maria Ohisalo (Greens).

“We can already say that a rescue package for carbon sinks will be needed.”

Helsingin Sanomat on Thursday reported that experts have criticised the report for not taking evidence of the decline in carbon sinks more seriously. Although the report acknowledges that the sinks are smaller than previously, it forwards no measures to tackle the situation and continues to base calculations on the assumption that the land use sector will function as a significant carbon sink.

Kaisa Kosonen, a climate and energy specialist at Greenpeace Finland, believes the government should have taken the opportunity to outline the rescue package for carbon sinks.

“This will become a bad precedent in that, in my view, the magnitude of the carbon sink problem is being dodged,” she said to the newspaper. “If the climate crisis and biodiversity loss were taken as seriously as other crises, major measures would already be in place.

Her disappointment was echoed by Markku Ollikainen, the chairperson of the Finnish Climate Change Panel.

“It’s bad that the issue [of declining sinks] isn’t discussed with the seriousness that it warrants,” he stated to Helsingin Sanomat. “It’s mentioned, but there’s no discussion about its repercussions. I can’t say what’s the thinking there.”

He pointed out that first warning of the decline in carbon sinks was received last year and that the warning was amplified by the preliminary data released by Statistics Finland in May. The data suggested that the land-use sector became a source of emissions for the first time ever in Finland in 2021.

Carbon sinks have always been the Achilles heel of Finnish climate action, according to Ollikainen.

“Finland really hasn’t had a policy toward the land-use sector. We’ve lived in hope that it’ll keep functioning as it has always functioned,” he slammed.

He listed a number of measures that the government should take to reduce emissions from the land use sector: emissions from peatlands and former peat-pots should be limited, paludiculture should be increased and continuous-cover forest management practices should be adopted in forested wetlands to remove the need for improvement draining.

Kosonen, in turn, called for reducing logging in state-owned forests and incentives for forest owners to protect and manage forests in a climate-friendly manner.

Ollikainen also acknowledged the progress made in terms of emissions reductions. The emissions declined during the first year of the coronavirus pandemic, but they have not rebounded to pre-pandemic levels despite the recovery of economic activity.

The annual climate report is drafted to provide lawmakers the latest information on the emissions framework, the longer-term plan for climate policy and progress made toward emissions reduction goals in the land use sector.