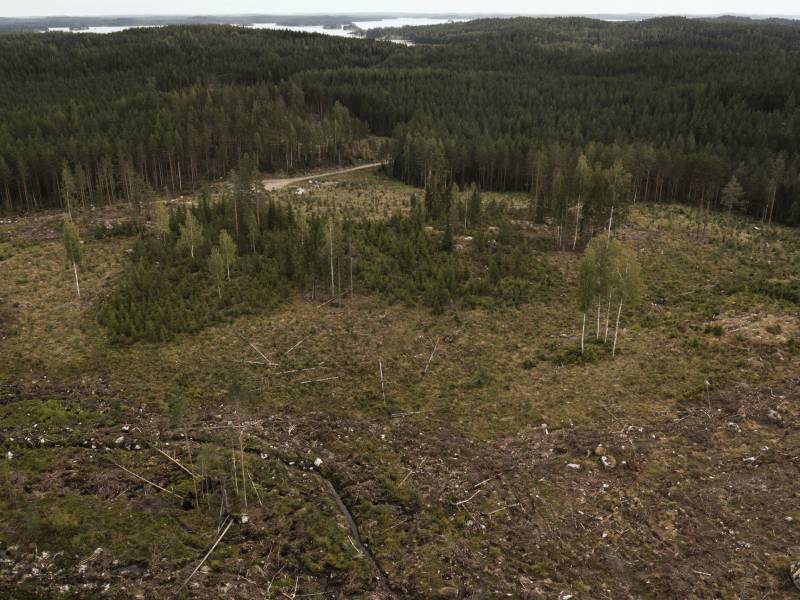 A clear-felling area in Konttila, Mikkeli, in August 2021. Practices such as clear felling and bog draining have created a generation of forests that appears to have reached an age where its growth is beginning to slow. According to YLE, the growth could slow down by more than 10 per cent compared to the assumption underlying the Finnish government’s climate goals. (Roni Rekomaa – Lehtikuva)

THE GROWTH of Finnish forests is expected to slow down for several decades, reports YLE.

The Finnish public broadcasting company wrote yesterday that, according to leading experts in the field, the annual increment in the growing stock will fall short of the latest estimate by Natural Resources Institute Finland (Luke).

Luke stated one year ago that the growth has slowed down to 103.5 million cubic metres per year, representing a decline of a couple of per cent from its previous estimate. Statistics Finland, meanwhile, revealed earlier this year that the land use, land-use change and forestry sector appears to have become a source of emissions for the first time ever in part due to the slowing growth of the growing stock.

Changes in the age structure are the main reason for the slowing of growth that had begun in the 1950s. Finland utilised its forests intensively to accrue wealth after the World Wars. Clear felling and bog ditching created a single generation of productive forests, but one of the outcomes is that forests are roughly the same age, albeit with some differences between southern and northern parts of the country.

“The large age groups have passed the stage of fastest growth and are in a stage where they no longer grow as much as earlier. That’s why the combined growth of all age groups has to slow,” explained Mehtätalo.

“When the growth of forests has increased for 50 years, it has pretty much maxed out. The growth will even out, and it’ll be interesting to see how much it decreases,” he said.

Also changes in environmental factors, such as droughts and storm damage, may have contributed to the change, but not to the extent of changes in the age structure.

The growth slowing down closer to 90 million cubic metres would have significant repercussions for the forest industry, the use of forests in general and the climate goals of Finland, highlighted YLE.

The assumption makes it possible to harvest industrial timber at the current rate well into next decade. The amount of stem wood harvested last year was 76 million cubic metres, signalling one of the biggest harvests in recent years.

Both Luke and Pellervo Economic Research have predicted that logging will remain at a high level also in 2023.

The Finnish government has outlined measures that seek to maintain the carbon sink at the current level and, in the longer term, strengthen the carbon sink. The sufficiency of the measures has been questioned by, for example, the Finnish Climate Change Panel.

If the growth of forests slows down by up to 10 per cent, it would require an adjustment of roughly 10 million tonnes in carbon dioxide calculations.

Although the difference between the annual increment and logging volume remained positive last year, the slowing growth of forests will narrow the difference and undermine future growth unless logging is reduced from the current level.

“This looks bad, and the only solution is to reduce logging,” Timo Pukkala, a newly retired professor of forest planning at the University of Eastern Finland, stated to YLE. “Everything else is mostly wishful thinking.”

He pointed out that reducing logging cannot undo the naturally slowing growth of forests. The biggest mistake, he added, would be to increase logging as it would further undermine the growth and carbon sink because the low growth rate of saplings.

“Whether we cut or don’t, there’s no going back to what was,” he summarised.