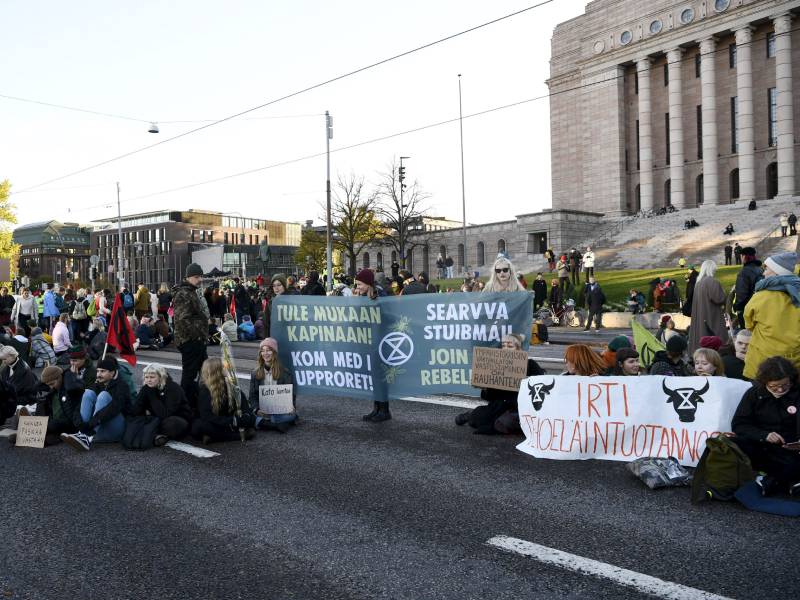 Protesters from Extinction Rebellion Finland sat on Mannerheimintie, the main thoroughfare of Helsinki, on Thursday, 6 October 2022. The protesters halted traffic in both direction for roughly three hours, before the section was cleared by police officers by around 8pm. (Emmi Korhonen – Lehtikuva)

A DEMONSTRATION by Extinction Rebellion Finland halted traffic on Mannerheimintie, the main thoroughfare of Helsinki, on Thursday.

Helsinki Police Department on Thursday stated that around 150–200 demonstrators walked onto the street at 5pm outside the Parliament House, defying an earlier notice from the police that the location is not a suitable site for the demonstration.

The demonstrators stopped traffic in both directions for around three hours, according to Helsingin Sanomat. Police ordered them to disperse at around 7pm and began removing them physically from the site 10 minutes later.

Traffic on Mannerheimintie was restored to normal at 8pm.

Helsinki Police Department said 46 people were brought into custody for failing to comply with the order to disperse, on suspicion of contumacy to police.

Extinction Rebellion Finland is urging the Finnish government to protect 30 per cent of the country’s land area, including all forests that remain in their natural state. The government, it states, should also enact laws to reduce logging in order to support the growth of carbon sinks and storages.