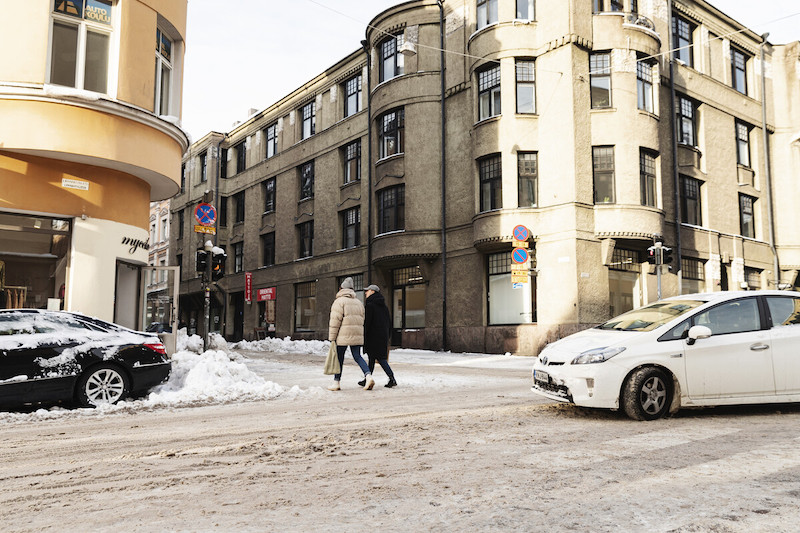 The pilot ban on studded tyres will enter into force on parts of Lönnrotinkatu street starting from 28 September 2022. The aim of the three-year pilot is to improve air quality and reduce traffic noise in the area.

The ban on studded tyres on Lönnrotinkatu will apply to the 900-metre section between Mannerheimintie and Hietalahdenkatu streets.

The one-way Lönnrotinkatu street runs west from the city centre, serving drivers travelling from Pohjoisesplanadi towards the Ruoholahti district and to the Kamppi and Punavuori districts.

A new traffic sign that prohibits passage while using studded tyres, in accordance with the new Road Traffic Act, will be tested on Lönnrotinkatu until autumn 2025. The pilot aims to study the impact of the studded tyre ban on air quality and the popularity of friction tyres. At the same time, the City will assess the ban’s consequences, compliance rate and suitability.

The ban will bring in new traffic signs and monitoring devices placed along the street. The devices monitor both air quality and the use of studded tyres.

Driveways accessible even with studded tyres

The sign that bans studded tyres still allows cars with studded tyres to access the plots along the street. Similarly, the ban does not apply to professional vehicles, such as taxis.

The ban is assessed to have a low impact on the businesses operating on Lönnrotinkatu and its vicinity, and their accessibility by car. The effects of the ban will be assessed during the pilot, and as such, the arrangements can be changed as necessary.

The air quality in Helsinki is generally good. However, on busy streets, the particulate matter content can be high in places. This is due to the exhaust emissions and street dust caused by traffic. It is assessed that moving from studded to friction tyres will have a significant positive impact on both air quality and traffic noise.

Street dust that decreases air quality consists of gritting and materials released from the street surface, especially when studded tyres grind on the street. The dust affects sensitive groups, such as children and persons with asthma, cardiovascular diseases or lung diseases, in particular.

The City of Helsinki aims to increase the use of friction tyres so that they would make up 70% of winter tyres by 2030.