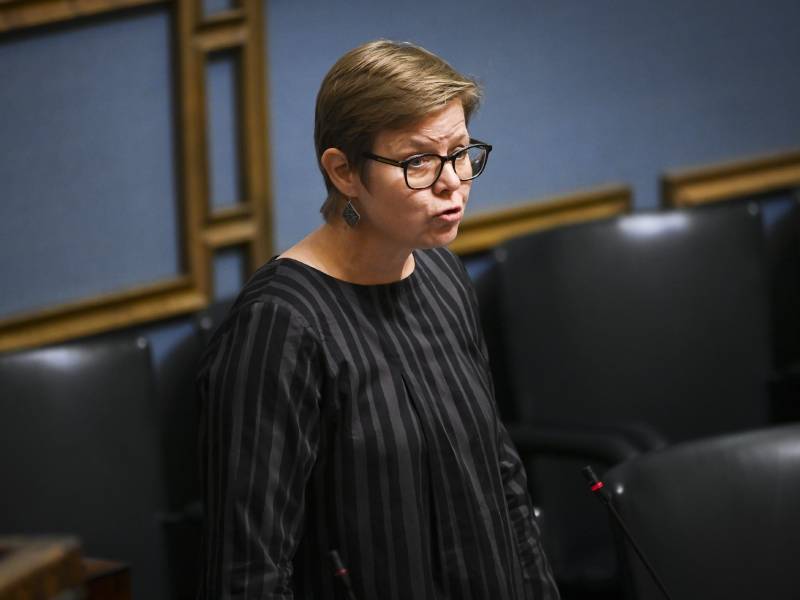 Minister of the Interior Krista Mikkonen (Greens) spoke during a plenary session in the Parliament House in Helsinki on 21 September 2022. Mikkonen on Tuesday told YLE that she is in favour of looking into the possibility of fencing parts of the border between Finland and Russia. (Emmi Korhonen – Lehtikuva)

MINISTER of the Interior Krista Mikkonen (Greens) on Tuesday confirmed she is in favour of exploring the possibility of building a fence on the border between Finland and Russia.

“No one is thinking that the entire 1,300-kilometre border should be fenced up. There are areas where the risk [of illegal crossings] is higher,” she underscored in an interview on YLE Aamu on Tuesday.

“They’re areas with settlements on both sides of the border and with old roads and routes – the kind of places where it could be easy to enter.”

The Finnish Border Guard estimated in a recent report that building a fence on up to 260 kilometres of the border is warranted in light of changes in the security environment of Finland. The construction of physical obstacles along the border is made possible by the border guard act adopted last summer.

Officials at the Border Guard have already started the process of identifying areas where the fence would have the greatest impact.

The Ministry of the Interior alone cannot make the decision to build the fence, but a political agreement is required from the entire government, reminded Mikkonen. While the cost of the project will depend on factors such as the length of the fence, the minister has previously estimated that the fence could cost over a million euros per kilometre.

“If you look at Estonia, the border fences built there cost about 1.3 million euros per kilometre,” she said to Helsingin Sanomat in May.

Mikkonen on Tuesday also acknowledged the concerns prompted by the increase in cross-border traffic following the partial mobilisation announced by Russian President Vladimir Putin. She reminded, though, that despite the sharp increase the number of border-crossers remains lower than before the coronavirus pandemic.

“The Border Guard is able to flexibly assign staff where they’re needed,” she assured.

“We’ve made sure that there are enough border guards at both border-crossing points and terrain along the eastern border,” she added. “We’ve also beefed up monitoring and we’ll definitely detect it if someone tries to cross the border.”

The Finnish government is expected to make its decision on new rules and entry restrictions concerning tourists from Russia on Thursday. Pasi Kostamovaara, the chief of the Border Guard, told Helsingin Sanomat yesterday that the agency is prepare to adopt the new rules and practices as soon as on Friday.

He also viewed that the fence would be required particularly in, for example, emergencies where large numbers of migrants are brought to the border to apply pressure on Finland.

“Our eastern border isn’t an exception to the eastern border of the European Union. Others have already introduced fences. It’s the duty of security authorities to prepare for the situation developing in a worse direction,” said Kostamovaara.

“Underlying this is a comprehensive assessment of the change in the security environment,” he added. “With Russia invading Ukraine and its relations with the west becoming significantly more strained, it has been estimated that the change in the environment is thorough and long term. It’s smart to prepare for more challenging situations. If they’re feasible, you have to prepare for them.”