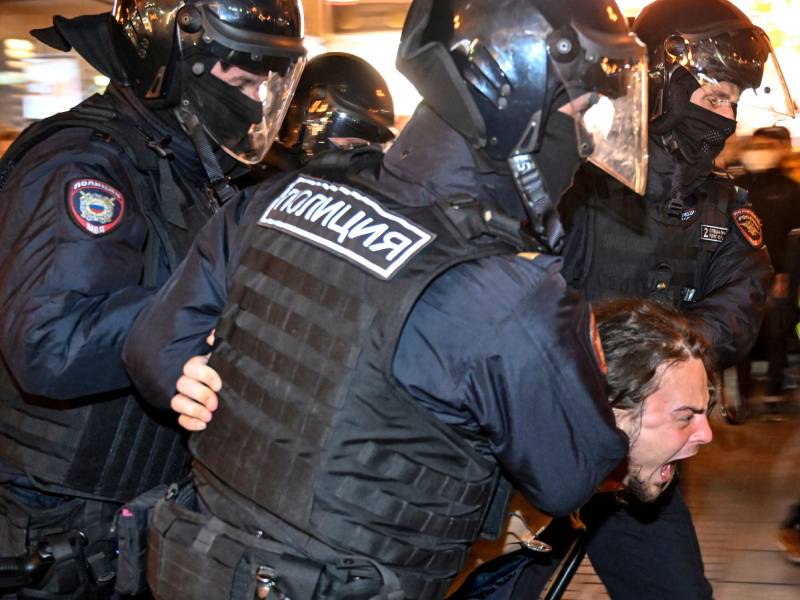 Police officers detained a man in Moscow on Wednesday, 21 September 2022, as protest broke out against the partial mobilisation announced by President Vladimir Putin. The mobilisation is expected to increase the number of Russian men seeking to leave Russia for Finland, reports Helsingin Sanomat. (Alexander Nemenov – AFP / Lehtikuva)

VISA APPLICATIONS for Finland reflect a growing desire among conscription-age men to leave Russia, Jussi Tanner, the director of consular services at the Ministry for Foreign Affairs, stated to Helsingin Sanomat on Wednesday.

“[The phenomenon] has increased substantially,” he said. “We’re getting applications that represent an effort to get out and where the return condition is not met.”

Rules of the Schengen Area state that a visa application can be denied if the applicant does not have the right or wherewithal to return to the country of origin.

Tanner reminded in an interview with the newspaper that authorities are required to comply with the law also in the current circumstance, even if it is possible to think that the flight of conscription-age men is a positive for Ukraine.

“It isn’t a question of willingness, also in this case,” he said. “If the documents have some inconsistencies or the return condition isn’t met, the visa won’t be granted.”

Russian President Vladimir Putin on Wednesday announcing a partial mobilisation of the population should intensify the phenomenon, viewed Tanner. Although Russian Minister of Defence Sergei Shoigu said the mobilisation would only apply to around 300,000 men, the decision may kindle concerns that the mobilisation could be expanded at some point now that the first step has been taken.

Direct flights from Moscow to Istanbul in Turkey and Yerevan in Armenia were sold out on Wednesday, according to media reports.

Jussi Halla-aho (PS), the chairperson of the Parliament’s Foreign Affairs Committee, estimated yesterday that the mobilisation create new uncertainty also in regards to the foreign and security policy of Finland.

“Putin has painted himself in quite the tight corner and he’ll probably look for a way out by trying different things and examining how western countries react to them,” he predicted in an interview with Helsingin Sanomat.

He interpreted the partial mobilisation partly as a sign of helplessness and a means to increase the domestic leeway of the Kremlin. With Russia recording significant casualties and struggling to recruit professional and volunteer soldiers to fight in Ukraine, the decision itself was not a surprise, he added.

“Putin definitely has a need to turn his own audience’s attention away from the losses suffered at the front lines,” said Halla-aho. “It’s naturally understandable that people don’t exactly have a desire to go to war where they’re led poorly and where the likelihood of getting killed is pretty high.”

Antti Häkkänen (NCP), the chairperson of the Parliament’s Defence Committee, estimated that the mobilisation will have no direct ramifications for the foreign and security policy of Finland. It is nevertheless necessary to monitor the effects and events of the war closely, he said.

“I think I saw comments that Russia considers the entire west as its enemy. This naturally highlights the current unpredictability of Russia,” he told the newspaper.