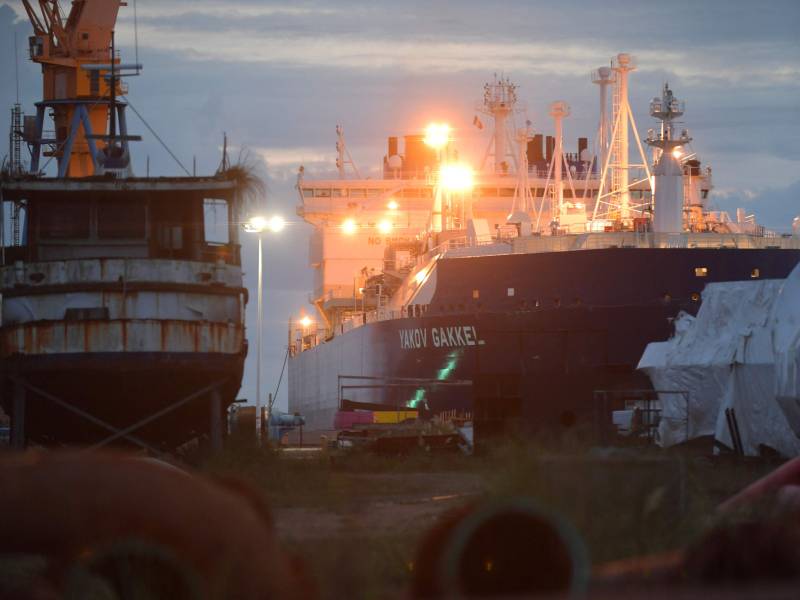 Yakov Gakkelö, an LNG carrier sailing under the flag of Bahamas, underwent repairs in Brest, France, on 1 September 2022. Shipments of Russian LNG to Finland have slowed but not stopped altogether, according to Helsingin Sanomat. (Vesa Moilanen – Lehtikuva)

Coral Energy, which sails under the Dutch flag, arrived at the town at around 9am yesterday following a roughly 33-hour journey from Vysotsk, Russia, according to tracking data available on Marine Traffic.

Gasum, the Finnish state-owned natural gas company, confirmed to the public broadcasting company that it received the order and procured the gas from Russia.

The gas will be transferred into a 30,000-cubic-metre terminal that is set to open in Hamina in October. The terminal is the first of its kind that is directly connected to the gas transmission network in Finland. It is capable of re-converting the gas from its liquefied state into its original, gaseous state through vaporisation and, once operational, feeding about three terawatt-hours worth of natural gas into the transmission network.

The gas can also be used to fuel vessels stopping at the port and transported by road to other parts of Finland, according to YLE.

Several European countries have started building terminals for liquefied natural gas in a bid to reduce their dependence on gas from Russia. Finland and Estonia have also addressed their natural gas needs by jointly leasing a floating terminal that is to be moored in Inkoo, Southern Finland.

Helsingin Sanomat on Monday reported that Gasum has brought an average two-and-a-half shipments of liquefied natural gas a month from Russia since 24 February, the first day of Russia’s invasion of Ukraine. While its two liquefied natural gas tankers have a capacity of 15,000–18,000 cubic metres, the quantities have varied on a shipment-to-shipment basis, said Olga Väisänen, the head of communications at Gasum.

The newspaper wrote about liquefied natural gas imported from Russia in August. Minister of European Affairs and Ownership Steering Tytti Tuppurainen (SDP) stated at the time that the imports must end.

The deliveries have continued, albeit at a reduced frequency.

Gasum has a long-term, so-called take-or-pay agreement with Gazprom Exports, the natural gas exporter backed by the Kremlin. The imports have continued because the exporter has demanded no changes to the agreement since the beginning of the war, such as that the payments be made in roubles, said Väisänen.

“The agreement is still binding in that regard, and so we’ve continued to import,” she told. “[The take-or-pay agreement] means that either we pick up the gas and pay for it or we don’t pick it up and still pay for it.”

“But we’ll naturally comply with all local or EU-level sanctions and restrictions if such are introduced.”

The Finnish company has procured liquefied natural gas from Russia since 2018. It has not disclosed the term of its current procurement agreement. While the European Union has imposed no restrictions on importing natural gas from Russia, Russia has dramatically reduced gas supplies to the continent in a bid to compel the bloc to lift its economic sanctions.