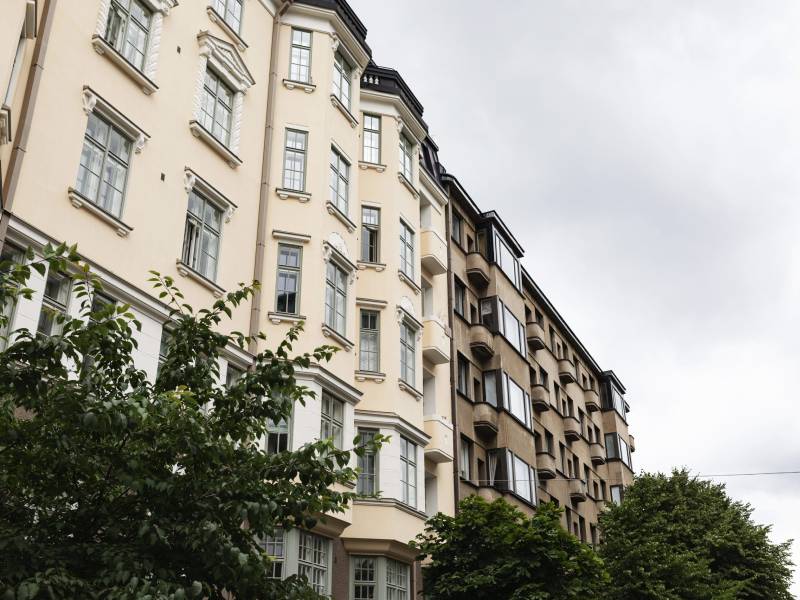 Blocks of flats on Vuorimiehenkatu in Helsinki on 28 July 2022. OP Financial Group on Wednesday said it expects high interest rates and sluggish economic growth to bring down house prices by up to three per cent in Finland in 2023. (Roni Rekomaa – Lehtikuva)

HOUSE PRICES in Finland will decrease by one to three per cent in 2023, predicts OP Financial Group.

OP on Wednesday estimated in its latest market review that house prices will decrease as a consequence of high interest rates and lethargic economic growth. The high rate of inflation, meanwhile, will lower the real prices of houses noticeably in both 2022 and 2023.

“The peak in the real estate market is behind us, demand has petered out and price development has become increasingly muted. The market mood is being weighed down particularly by rising interests, but also by eroding economic confidence and increases in costs,” the financial services provider summarised.

The Finnish real estate market was in a fairly good situation at the beginning of the year, even though it had already cooled down significantly from the red-hot year that was 2021. Market activity continued to decline in the summer, with the number of sales falling particularly in recent months.

Although average house prices have continued to creep up, the year-on-year increase will not amount to more than one or two per cent, according to OP Financial Group.

House prices increased by an average of 1.7 per cent year-on-year in the second quarter of the year, driven by rises outside the largest population centres in Finland. While the six largest cities saw the prices creep up by 1.4 per cent, other regions reported an average increase of 2.3 per cent.

In Helsinki and Vantaa, house prices rose by less than one per cent between April and June.

Economist Joona Widgrén reminded that house prices have tended to swing more violently in both directions in and around Helsinki.

Although house prices rose in nearly all provinces in the first half of the year, economists caution against using the development to draw any conclusions about the mega-trend of urbanisation.

The effects of rising interests and housing costs are already widely manifested in the real estate market. The market activity has decreased significantly from earlier parts of the year as a consequence of the uncertainty that is reflected in, for example, the latest consumer confidence indicator of Statistics Finland.

The indicator showed that significantly fewer households are considering buying a house.

“Rising interests and costs are giving buyers something to chew on. The rise in housing costs is naturally directly affecting the ability of buyers to pay,” said Widgrén.

As the costs creep up and demand decreases, construction is expected to slow down. Although the number of residential construction projects set for completion this year remains high, economists are expecting the number to drop notably next year compared to the record highs of recent years. Between April and June, the number of building permits granted for residential units was 13 per cent lower than the corresponding period in 2021.

“Construction is decreasing as a result of the rising costs of both construction and construction materials. The declining demand for new flats is worsening the situation further, and the near future looks fairly bleak for construction,” analysed Widgrén.