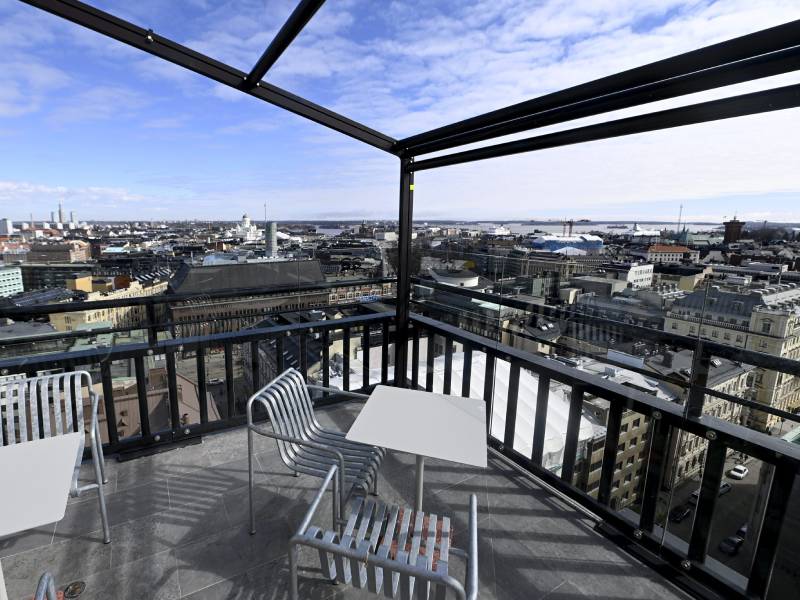 A view over the rooftops of Helsinki from Ateljee Bar, the rooftop of Hotel Torni, on 12 April 2022. Officers at Helsinki Police Department told on 16 August that they failed to identify the substance that caused symptoms to three of the bar’s employees in early July. (Vesa Moilanen – Lehtikuva)

OFFICERS at Helsinki Police Department have wrapped up their pre-trial investigation into an incident in which three employees developed symptoms after being exposed to a substance in Ateljee Bar, the rooftop bar of Hotel Torni, in Helsinki.

Detective chief inspector Crista Granroth told Helsingin Sanomat on Tuesday that investigators did their utmost identify the substance, but it could not be identified in either forensic analyses or medical sequencing.

Examinations of the victims similarly yielded no results, according to Helsinki Police Department.

“Samples analysed in the forensic lab didn’t reveal any concrete substance, and no substances or combinations of substances that could explain the symptoms of bystanders were found in the residence of the person of interest. Targeted medical sequencing couldn’t be carried out because there was no clue what the substance could be,” she explained.

Granroth revealed that the symptoms were caused by a roughly 50-year-old woman, who was pouring something from small flasks she had brought with her into the bar. While it is clear that her actions caused the symptoms experienced by the three employees, it is not believed that she had deliberately diffused the substance.

“The substance was presumably something airborne. It may have been ethereal extract, hygiene products or spices,” she said to the newspaper.

The incident was initially investigated as aggravated assault, imperilment and criminal damage. “If a person has asthma and the actions of another person cause them shortness of breath, it’s a very serious state,” said Granroth.

Police also managed to interrogate the suspect, but she was unable to shed further light on the incident and was not found to be in possession of any substances engineered to cause harm to other people. The pre-trial investigation was terminated because it produced no grounds for bringing charges against anyone.

“Even though her actions caused these symptoms, there really isn’t a crime here.”