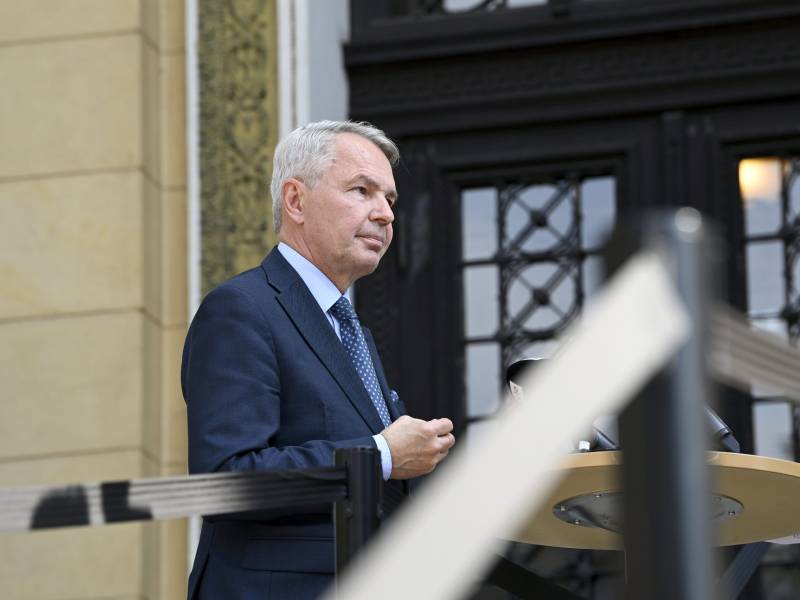 Minister for Foreign Affairs Pekka Haavisto (Greens) spoke to reporters outside the House of the Estates in Helsinki on Tuesday, 16 August 2022. The Finnish government yesterday convened for a so-called evening school session to discuss visas granted to Russians. (Markku Ulander – Lehtikuva)

THE MINISTRY for Foreign Affairs on Tuesday said Finland will halve the number of visa appointments scheduled for Russians as of September.

Finland is presently scheduling roughly a thousand visa appointments a day for Russians. The number of appointments will be reduced to an average of 500, with 400 of the appointments reserved for applicants with, for example, family, study or work-related reasons for entering the country.

The decision was announced yesterday after a government meeting at the House of the Estates by Minister for Foreign Affairs Pekka Haavisto (Greens). He stated that the decrease can be achieved without any legislative amendments by processing applications for tourist visas only on particular days or times of day.

“It’d still be possible to apply for a small number of tourist visas,” he said according to YLE.

Russia, he predicted, may respond to the decision symmetrically. Helsingin Sanomat on Tuesday wrote that the decision immediately garnered media attention in Russia, with news outlets highlighting statements not only by Haavisto, but also by Jussi Tanner, the head of consular services at the Ministry for Foreign Affairs, and Prime Minister Sanna Marin (SDP).

Svetlana Zhurova, a deputy chairperson of the Duma’s Committee on International Affairs, told Lenta.ru that the decision may have a detrimental impact on relations between Finland and Russia.

The Ministry for Foreign Affairs and Ministry of the Interior have also agreed to conduct a study into the feasibility of introducing a national humanitarian visa to facilitate the entry of journalists and civil rights activists to Finland. Haavisto pointed out that such visas are currently offered by a number of countries, but not by Finland.

“This shortcoming was highlighted already in the case of Afghanistan, as our tools to help for instance female journalists who had worked there were very limited compared to countries that had adopted this kind of a national humanitarian visa,” he told.

“With Russia attacking Ukraine, this problem has re-emerged.”

Finland and the Baltics are intent on proposing that a joint decision be made on visas granted to Russian, revealed Haavisto. EU-level action and decisions, he underscored, are required as it is impossible to prevent border crossings by Russians holding visas granted by other Schengen countries.

Greece, Italy and Spain are presently the countries granting the most visas to Russians, he said.

“If you want to limit the flow of tourists more, it’d be good to make the decision together.”

Finland is also supportive of suspending the visa facilitation agreement between Russia and the EU, which reduces the price of a tourist visa from 80 to 35 euros. The issue will be brought up as foreign ministers from the 27-country bloc meet at the end of August.

Other European countries have taken a more moderate position on the question. German Chancellor Olaf Scholtz said in Oslo on Monday that tourists should not be blamed for the war waged by President Vladimir Putin.

“All the decisions we take should not make it more complicated to leave the country, for getting away from the leadership and the dictatorship in Russia,” he said.