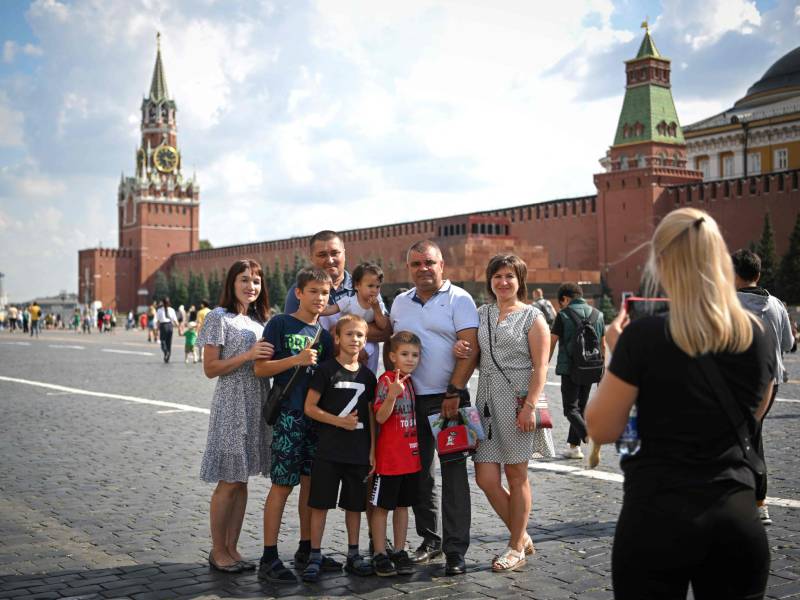 A group of people, including a boy wearing a T-shirt with the letter Z, posed for a photograph on Red Square in Moscow on 25 July 2022. Professors in Finland have reminded that the need to understand Russian language, culture and society is great especially in the current circumstance. (Natalia Kolesnikova – AFP/Lehtikuva)

STT on Sunday reported that some applicants chose not to take part in the entrance exam, whereas others turned down admission to the programmes. An understanding of the language and culture, though, is important particularly in the prevalent circumstance, indicated Tomi Huttunen, a professor of Russian literature and culture at the University of Helsinki.

“Understanding the Russian language, culture and society is an important security political resource as we think about influence campaigns or the possible weaponisation of immigration,” he said.

“You shouldn’t spawn the kind of an information barrier where you don’t want to know what’s going on in Russia. We have to know what are today’s main news, what’s being written about Finland and how views on things are changing.”

Sanna Turoma, a professor of Russian language and culture at Tampere University, reminded the news agency that one objective of university studies is to develop the capacity to critically evaluate various power structures. Knowledge of the Russian language, culture and society are key future skills, according to her.

“Cultural interaction is the key to preventing and resolving conflicts,” she stated.

Russian language, she also highlighted, has been important for refugees from Ukraine, proving on many occasion more helpful than English.

“But you have to bear in mind that it’s also the language of the enemy for many Ukrainians fleeing the war,” she added. “The Russian state is exploiting the persisting impression in Russia that Ukrainian is a little cousin of Russian. Undermining the autonomy of Ukrainian language and culture is undermining the sovereignty of the Ukrainian state.”

The Finnish Immigration Service (Migri) on 8 August reported that it has received a total of 35,074 applications for temporary protection from Ukrainians. A decision has yet to be issued on roughly five per cent of the applications, according to Migri.

The total number of people within the reception system stood at an all-time high of over 37,000 on 4 August.