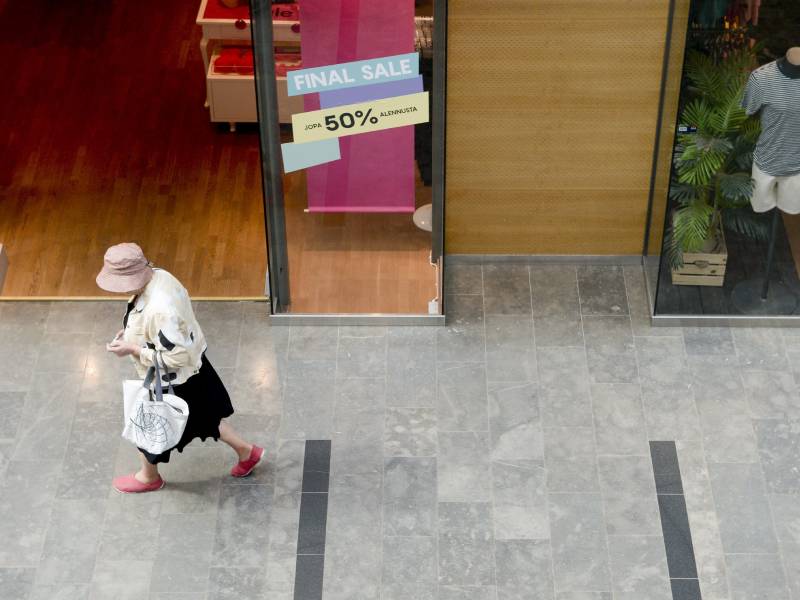 A person walked by a shop advertising a final sale in Iso Omena in Espoo on 26 July 2022. Rising consumer prices are a cause of concern for as many as 92 per cent of Finns, indicates a survey commissioned by OP Financial Group. (Mikko Stig – Lehtikuva)

INFLATION has had a notable impact on the consumption habits of Finns in 2022, suggests a survey conducted for OP Financial Group by Taloustutkimus.

OP on Tuesday reported that 59 per cent of the survey respondents said they have altered their consumption habits due to soaring consumer prices, with many cutting back on food, fuel, consumables and travel.

High fuel prices, for example, have prompted 59 per cent of the public to reduce using a car and almost 20 per cent to cycle and walk more.

The effects of price increases have been the greatest on 15–24-year-olds, 65 per cent of whom reported that inflation has affected their consumption habits, and the smallest on 65–79-year-olds, according to OP.

“Because many young people have yet to build up wealth and may not always have regular income, they are looking for more affordable alternatives to their essentials,” analysed Masa Peura, the director in charge of everyday financial services at OP.

The survey also found that women have cut back on spending on food, daily essentials and restaurant food clearly more than men.

Inflation is a cause for concern for many even if they have yet to respond to it by reconsidering their consumption habits, as 92 per cent of respondents expressed their concern about the phenomenon. Another 59 per cent told that they are concerned that their housing costs will increase as a result of rising inflation and interest rates.

Nearly a quarter also told that they can no longer cope with the rising prices financially.

“The survey shows that especially 35–49-year-old employed people believe their financial situation will deteriorate this year. This is attributable partly to the fact that wage hikes have been moderate this year,” said Peura.

Almost 1,100 Finns responded to the survey between June and July.