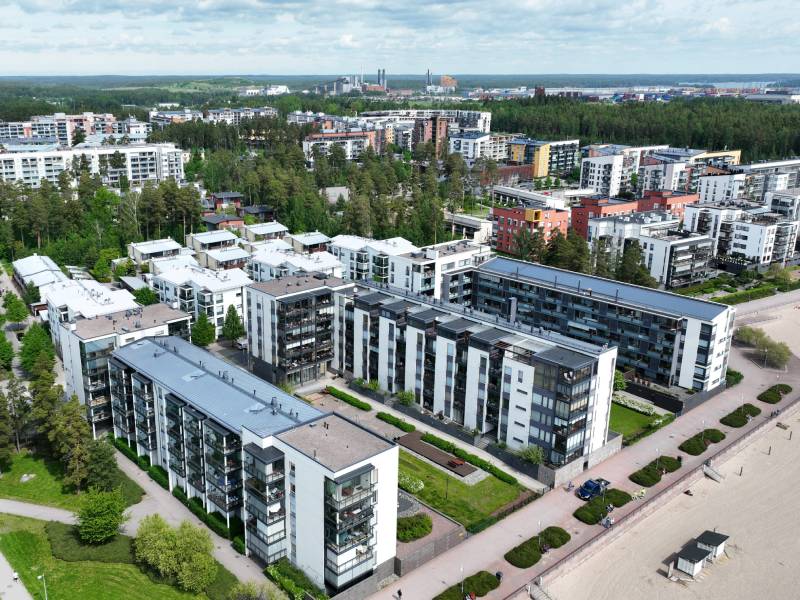 An aerial photo of blocks of flats in Vuosaari, Helsinki, on 10 June 2022. Finnish mortgage borrowers should prepare for rising servicing costs due to the interest-rate hike announced on Thursday by the European Central Bank. (Vesa Moilanen- Lehtikuva)

THE EUROPEAN Central Bank (ECB) on Thursday announced it is raising its interest rates by 0.5 percentage points in a bid to rein in inflation that has been substantially higher than the target level of two per cent, having stood at 8.6 per cent in the eurozone in June.

The first in over a decade, the raise was greater than expected as the monetary authority had indicated a month earlier it would be raising rates by 0.25 percentage points.

Tuuli Koivu, the chief economist at Nordea, stated to YLE on Thursday that the move, although more assertive than expected, will only result in a modest increase in Euribor rates. Euribor 12, the most common reference rate for housing loans in Finland, had already priced in the expectation that interest rates will be raised by one percentage points between July and September.

“Those expectations didn’t change too much today even though the raise itself was greater than expected,” she explained.

While she predicted that the monetary authority will raise its rates by another 0.5 percentage points in 2023, she reminded that making predictions about the future is extremely difficult because accelerating inflation is creating pressure to raise the rates at the same time as signs of an economic slowdown are doing the opposite.

“China is doing worse than expected. There are uncertainties brought about by the war, the decline in purchasing power that could cut off Europe’s economic growth and alleviate the situation,” said Koivu.

Nordea in June forecast that the 12-month Euribor could climb to about 2.75 per cent by mid-2023. Koivu, though, pointed out that the forecast has since been revised down due to the economic uncertainty, adding that she personally expects the rate to rise slightly over two per cent by July 2023.

“[An increase of] one percentage point from today would be my own estimate. I’d say it goes over two per cent rather than falls short of it,” she told the public broadcasting company.

The development, she stated, will certainly have an impact on housing loans.

“Households should now prepare for all sorts of scenarios. I’ve been an economist for over 20 years and I don’t recall ever seeing this amount of uncertainty,” said Koivu. “Everyone should now think how big of an interest rate risk they’re willing to accept and if that could be reduced with different kinds of hedges. You really should think about these kinds of things proactively.”

Lippo Suominen, the chief strategist at S Bank, told Helsingin Sanomat that the ECB raising its rates will result in a “clear bump” in Euribor rates as soon as Friday. Although the raise had been largely priced in, its impacts may be significant at the individual level.

He also reminded that interest rates had been unusually low for a considerable period of time.

“It has been said many times that interest rates being at zero isn’t the normal state of things. It was fun while it lasted, but hopefully not too many were counting on that [continuing],” he commented, adding that borrowers need not fear that interest rates could rise to the levels of the 1990s.

“Us seeing interest rates of even three or four per cent feels like a really distant thought. But you should prepare for them rising to around two per cent,” told Suominen.