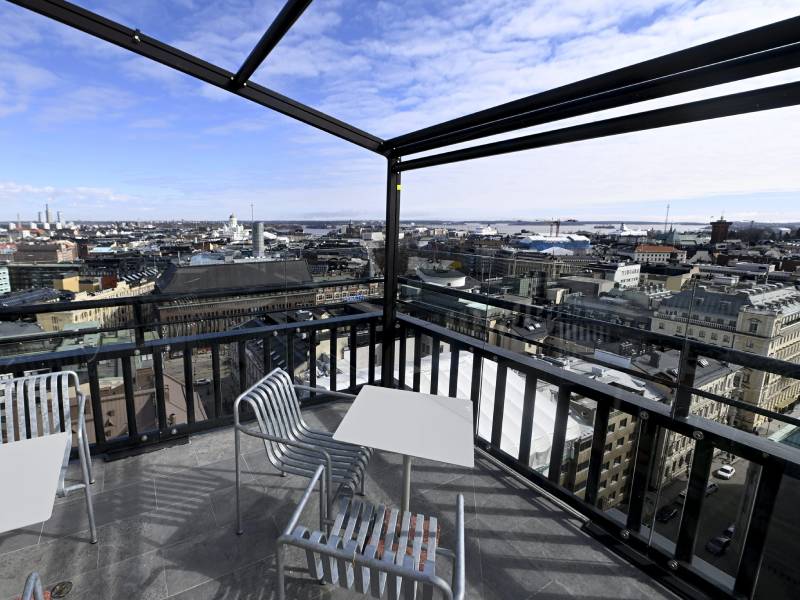 A view over the rooftops of Helsinki from Ateljee Bar on 12 April 2022. Police in Helsinki on Wednesday revealed they have arrested a woman suspected of diffusing an unknown substance in the rooftop bar on 8 July 2022, causing symptoms to three staff members. (Vesa Moilanen – Lehtikuva)

OFFICERS at Helsinki Police Department have arrested the woman suspected of aggravated assault, imperilment and criminal damage for diffusing a dangerous substance in Ateljee Bar, the rooftop bar of Hotel Torni, in Helsinki on Friday, 8 July.

Investigators have yet been able to interrogate the woman, however.

Crista Granroth, the officer in charge of the pre-trial investigation at Helsinki Police Department, told Helsingin Sanomat that investigators have yet to have the opportunity to interrogate the suspect because of her state but declined to comment further on matters related to the health of the suspect.

“We don’t currently have the opportunity to interrogate her, and we won’t be getting any answers during the course of this week either,” she said.

Granroth added that police are presently not intent on requesting that the woman be placed in pre-trial detention, explaining that the measure is not necessary to secure the investigation. Police have yet to also identify the substance the woman is believed to have diffused in the bar or shed light on the method of diffusion.

Three staff members developed symptoms that required medical attention after being exposed to the substance. Altogether around 20 people were in the bar at the time of the incident, according to Helsingin Sanomat.