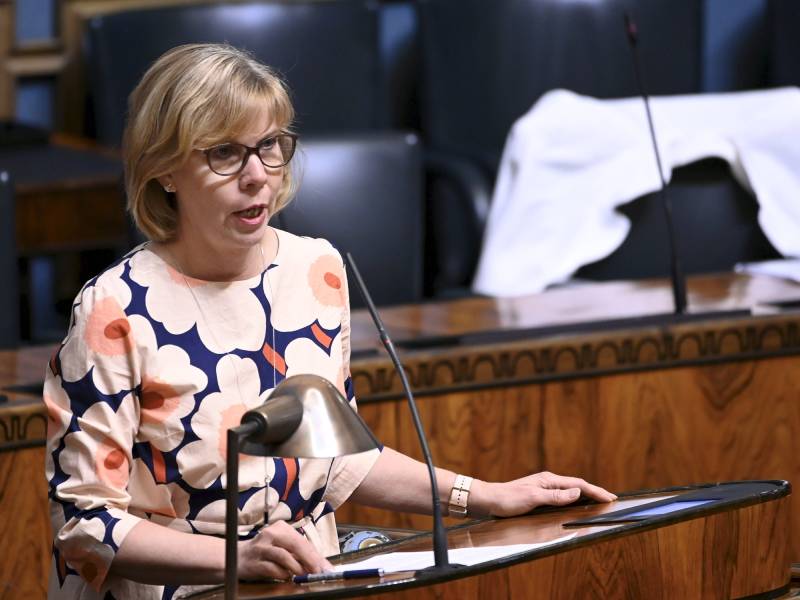 Minister of Justice Anna-Maja Henriksson (SFP) had the floor during a plenary session in the Parliament House in Helsinki on 22 June 2022. (Heikki Saukkomaa – Lehtikuva)

THE KURDISH COMMUNITY in Finland can rest assured that the country will continue to make decisions based on its existing legislation and the European Convention on Extradition, states Minister of Justice Anna-Maja Henriksson (SFP).

Henriksson on Friday stated to Helsingin Sanomat that Finland is not considering amending its laws in response to the demands made by Turkish President Recep Tayyip Erdoğan.

Kurds in Finland have been worried that the country could give in to the demands and, for example, subject them to surveillance and provide information on them to authorities in Turkey. The question of extradition has also become a topic of discussion following the signing of a memorandum between Finland, Sweden and Turkey in Madrid, Spain, on Tuesday.

Turkey pledged in the memorandum to support inviting Finland and Sweden to join Nato. Finland and Sweden, in turn, promised to address any pending extradition requests expeditiously and thoroughly while taking into account information, evidence and intelligence provided by Turkey.

Henriksson estimated that the memorandum is founded on the premise that the countries will continue to act in accordance with the European Convention on Extradition.

Finland and Turkey have not, as far as she knows, had any discussions about the names of people to be extradited – nor would such discussions be in line with way of working in Finland. No new extradition requests have similarly been submitted to the Ministry of Justice or Ministry for Foreign Affairs.

The country will continue to subject all extradition requests from foreign countries to a careful perusal and legal assessment, according to Henriksson. This process, she underscored, entails no political consideration, but the officials justify their decisions in accordance with the law and international treaties.

“I’ve served as the minister of justice for a total of seven years and, during this time, I haven’t once doubted that the officials processing extradition requests acted in a way that’s unbiased and legally just,” she said.

“Principles of the rule of law and the equal treatment of all people are the most important issues for me as the minister of justice. Our values are founded on these principles and we won’t be compromising on them.”

Henriksson also reminded that the memorandum has three signatories and that some of the demands may have been targeted more at Sweden than Finland.

“It’s worth keeping in mind that we’re talking about three countries here. On the other hand, also Turkey and Sweden have committed to the Council of Europe’s extradition convention, similarly to Finland.”

The convention states, for example, that extradition must not be granted in cases where the request was based on a political offence or an offence recognised under military but not ordinary criminal law. Signatories of the convention are also not obliged to extradite their own nationals.