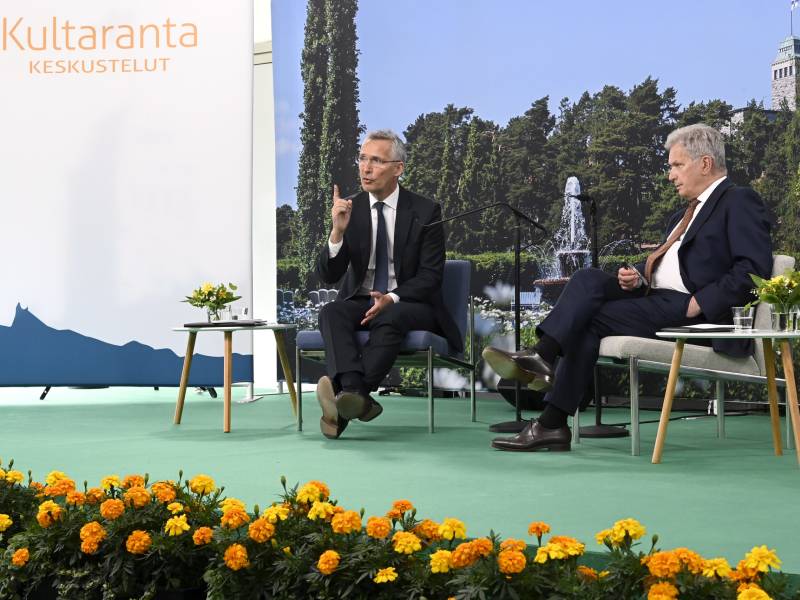 Nato Secretary General Jens Stoltenberg and Finnish President Sauli Niinistö on 12 June discussed topics such as the war in Ukraine and the Finnish bid to join Nato at the opening of Kultaranta Talks, a foreign and security policy seminar hosted annually by Niinistö in Naantali, Southwest Finland. (Markku Ulander – Lehtikuva)

PUBLIC SUPPORT for Nato membership has once again crept up to a record high in Finland.

Helsingin Sanomat on Monday reported that its latest opinion poll found that 79 per cent of the public want the country to join the defence alliance, representing an increase of six percentage points from the beginning of May.

The increase coincided with a decline in the share of unsure respondents, according to the newspaper.

Only 11 per cent of respondents stated that they oppose the membership and 10 per cent that they are unsure about their position on the issue.

Helsingin Sanomat also surveyed public views about the possibility of amending the legislation or compromising on certain key principles in response to the conditions imposed on the membership by Turkey. Up to 70 per cent of Finns said Finland should do neither to accommodate the demands of Turkey. Only 14 per cent, by contrast, viewed that the country should not rule out the possibility of making such concessions.

Turkish President Recep Tayyip Erdoğan has opposed the Finnish and Swedish bids to join Nato, claiming that the countries are not tough enough on terrorism.

The demands have slowed down a process that only a couple of weeks ago was expected to reach a key milestone at the Nato summit held in Madrid, Spain, on 28–30 June. The defence alliance is, for example, to approve a new strategic concept that will steer its military and political development for the next roughly a decade.