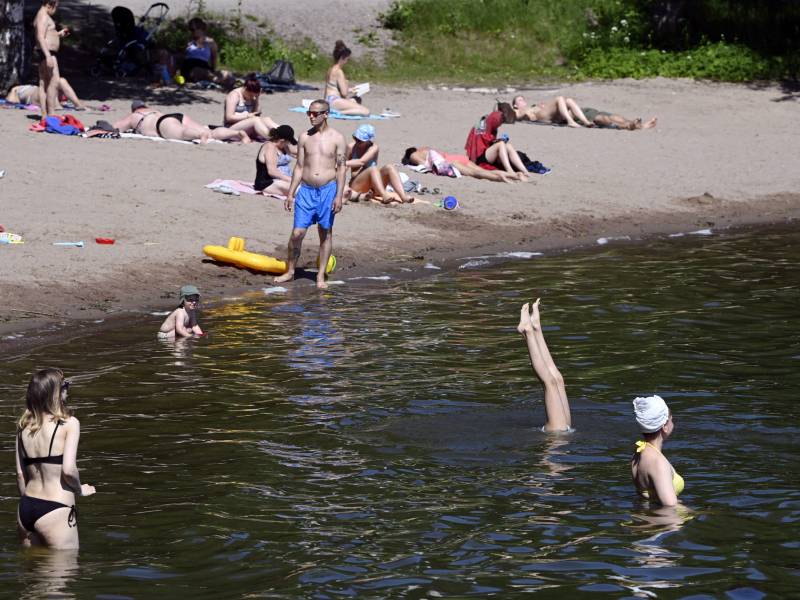 Hot weather drew people to the Marjaniemi beach in Helsinki on Sunday, 26 June 2022. The spell of hot weather is to continue well into this week, according to forecasts. (Antti Aimo-Koivisto – Lehtikuva)

THIS WEEK will be the warmest of the summer so far as temperatures are expected to stay above 30°C in large parts of Finland, tells Matti Huutonen, a meteorologist at YLE.

“The 30-degree mark may be breached especially in Southern and Central Finland. And in large parts of the country the 25-degree mark will be hit. The mercury will occasionally rise above 25 degrees also in Northern Lapland,” he commented on Sunday.

Such a heatwave is a rare occurrence in June.

“Day temperatures are almost 10 degrees higher than usual, so we’re not exactly talking about something typical. You can tell the difference by comparing the current figures to long-term statistics,” he said.

The highest temperature so far this year, 31.2°C, was recorded in Nuuksio, Espoo, on Sunday. Forecasts indicate that there is a high likelihood that the record will be broken this week, probably on Monday or Saturday.

Also night temperatures have been on the rise, and some parts of the country will likely experience so-called tropical nights – nights when the temperature does not fall below 20°C – due to rising land and water surface temperatures.

The Finnish Meteorological Institute (FMI) has issued warnings of potentially dangerous and dangerous heat waves for nearly the entire week.

Eveliina Tuovinen, a meteorologist at FMI, told Helsingin Sanomat on Sunday that the weather could cool down in areas along the eastern border due to a stream of cooler air on Monday. The mercury, however, will not drop significantly and will likely continue to hover between 20°C and 25°C.

The current weather will continue well into this week in southern and central parts of the country.

“There’s no end in sight for the hot weather,” said Tuovinen.