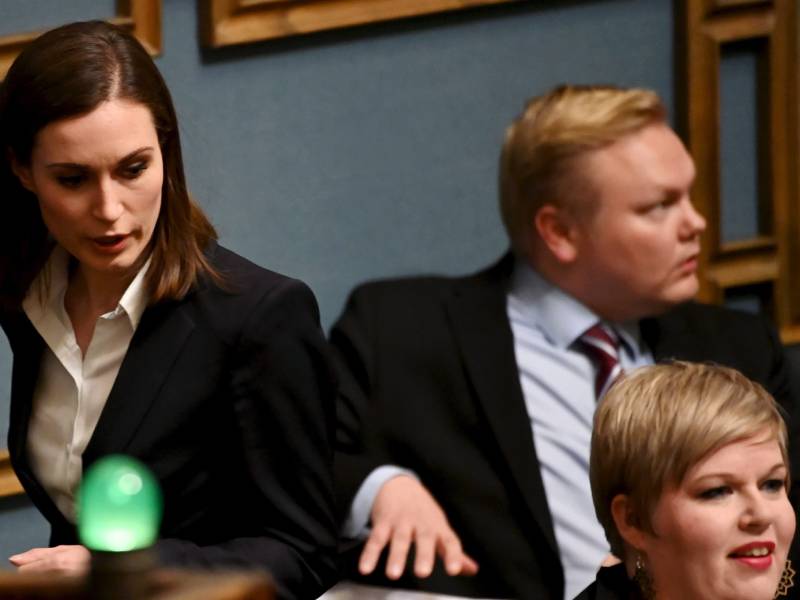 Ministers Sanna Marin (left), Antti Kurvinen and Annika Saarikko attended a question-time debate in the Finnish Parliament in October 2021. Both Marin and Saarikko have mentioned income tax cuts as a possible measure to bolster the purchasing power of consumers in the face of rapid inflation. (Antti Aimo-Koivisto – Lehtikuva)

ECONOMISTS in Finland have reiterated their reservations about the tax cuts floated by policy-makers as a cure for soaring consumer prices, writes YLE.

Minister of Finance Annika Saarikko (Centre) has repeatedly suggested that lowering the income tax would be a means to alleviate the difficulties of consumers. Prime Minister Sanna Marin (SDP) revealed last week that the government will mull over tax cuts especially for low and middle-income earners in the autumn.

The National Coalition, meanwhile, has called for tax cuts worth billions of euros.

Economists interviewed by the public broadcasting company, however, warn that lowering the income tax in an attempt to help consumers to cope with the inflationary environment could be counter-intuitive.

“When inflation is high, tax cuts can accelerate it further,” summed up Sanna Kurronen, the chief economist at Finnish Business and Policy Forum (Eva).

Another factor to consider is the economic uncertainty created by the Russian invasion of Ukraine. Olli-Pekka Ruuskanen, the research director at Pellervo Economic Research, viewed that an income tax cut would unlikely succeed in boosting private consumption amid the prevalent uncertainty.

“Even if you lowered the income tax, it wouldn’t necessary be channelled into consumption because households are worried about the future and would definitely save most of their income,” he explained to YLE.

It is also difficult to design the cuts in a way that benefits the low-income earners who have been hit the hardest by the rise in food and energy prices.

“Lowering the income tax isn’t the best way to improve purchasing power because it’d also affect middle-income and rich people, including the super rich. This would handicap the public economy and that isn’t desirable,” said Anni Marttinen, the chief economist at the Finnish Federation for Social Affairs and Health (SOSTE).

The income tax cut could be re-considered once the economic outlook has changed, according to Kurronen. “When it looks like inflation is slowing down and economic growth starts to lose momentum, that’s the right time to lower income taxes as a stimulus measure.”

Both Marin and Saarikko referred to the labour market situation and, more specifically, the need to refrain from agreeing on excessive pay increases in justifying the tax cuts.

“There are concerns that the acceleration of inflation could spread to the whole economy through pay increases. An income tax cut is not the most straightforward tool to tackle this because there are no guarantees that there wouldn’t still be high pay increases,” Ruuskanen commented to YLE.

The economists stressed that the tools to tackle the rising cost of living should be such that do not accelerate inflation, such as making index-based increases in social security benefits. The Finnish government has already announced it will make index-based adjustments to social security ahead of schedule, effectively promising increases in benefits such as unemployment security, guarantee pension and student financial aid for over 18-year-olds living independently.

“One of the best ways is making these index-based increases in basic security for people who are suffering the most and then, if that isn’t enough, considering some kind of additional support,” said Marttinen.

The government, ultimately, has limited options at its disposal to rein in the surge in consumer prices, given that it is a consequence of various factors. Russia’s war in Ukraine inevitably has an impact on prices, reminded Ruuskanen.