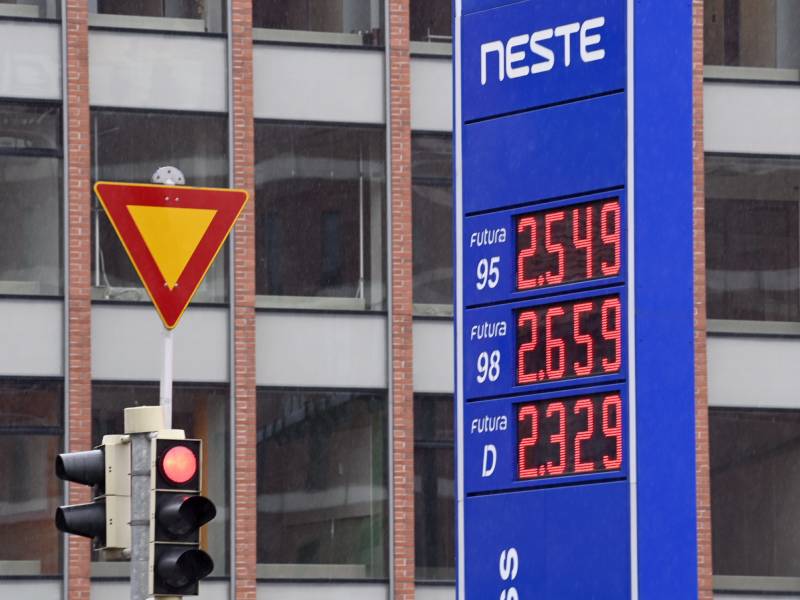 Fuel prices outside a Neste Express station in Helsinki on 2 June 2022. It is not completely unfeasible that the prices hit the three-euro mark later this summer or autumn, according to an expert interviewed by YLE. (Jussi Nukari – Lehtikuva)

“I’m still sceptical and hopeful that the prices won’t rise that much. The possibility that the price could be three euros a litre should nonetheless be taken into account,” he commented on YLE Radio Suomi on Monday.

The Organisation of the Petroleum Exporting Countries (OPEC) decided at the start of the month to increase oil production by 648,000 barrels per day in July and August. The increase will suffice neither to compensate for the decreasing production and use of Russian oil, nor to reduce the consumer prices of fuel, according to Lehmus.

The United States, he said, will be key for consumer prices. Even if the country succeeded in increasing its production, it might not have a significant impact on consumer prices.

“It may be difficult for consumers who have to fill up their car a lot,” said Lehmus.

Diesel and petrol prices have risen to record-high levels in the wake of the Russian invasion of Ukraine.

Sanna Kurronen, the lead economist at the Finnish Business and Policy Forum (EVA), and Marita Laukkanen, the chief researcher at VATT Institute for Economic Research, told the public broadcaster yesterday that policy-makers should nonetheless refrain from meddling with fuel prices.

“You should definitely not meddle with the prices. We’re living in a market economy where the prices are defined by markets and meddling with them is very expensive and ineffective,” said Kurronen.

Lowering the fuel tax has been proposed as a solution by the likes of the Finns Party and the Automobile and Touring Club of Finland.

Kurronen shot down the proposal as counter-intuitive: “We now have an oil shortage, meaning the demand exceeds supply and causes price increases. If price increases are prevented, we’d have even more demand, which would keep the pressure on prices high.”

Lowering the tax would also be an ineffective way to alleviate the situation for low-income households, as fuel costs tend to be the highest among middle and high-income earners.

Laukkanen, in turn, reminded that the measure would dent tax revenues by a 10-figure sum.

“We also don’t know how much the drop in the fuel tax would be reflected in prices at the pump, how much in the profits of service stations. We don’t even have the official data that’d enable us to approximate this,” she highlighted to the public broadcaster.

She added that most measures would fundamentally require a political decision on which population groups should receive the compensation. Many of the proposed ones, including that to increase the tax deduction for travel expenses, have been targeted at consumers who are relatively well off.

The Finnish government has announced a few measures to compensate businesses and consumers for the soaring fuel prices, including the temporary reduction of the obligation of fuel distributors to supply a minimum amount of renewable fuels. The measure has drawn criticism due to its impact on emission reduction aims not only from experts, but also from the Ministry of the Environment and Ministry of Transport and Communications.

Kurronen and Laukkanen are reluctant to praise any of the measures.

“This kind of see-sawing is a very bad thing for the green transition. It doesn’t send a good signal when it comes to investing in the green transition,” told Kurronen. “I think it’d be important for policy-makers to indicate clearly that fossil fuels will never be cheap again.”

The two experts urged consumers to reduce fuel consumption by means such as car-pooling, public transport or driving at lower speeds. The justification for reducing fuel consumption is very firm, reminded Laukkanen.

“Denting Russia’s war coffers in the short term and mitigating climate change in the longer term,” she said.