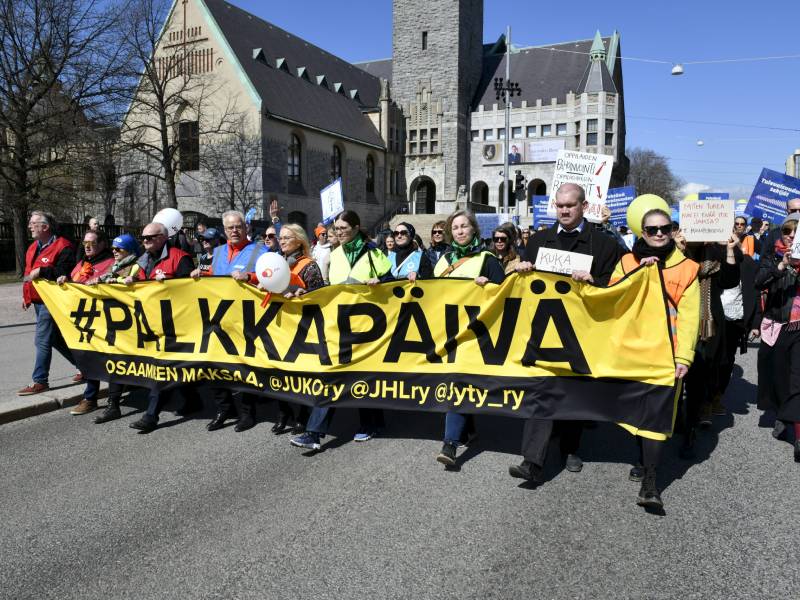 Municipal-sector employees called for higher wages in a demonstration organised in Helsinki on 5 May 2022. (Heikki Saukkomaa – Lehtikuva)

LOCAL and County Government Employers (KT), and the Public Sector Union (JAU) and Negotiation Organisation for Public Sector Professionals (Juko) on Monday reached a negotiated settlement on the terms of employment for hundreds of thousands of municipal-sector employees.

The settlement will be next considered by the administrative boards of the trade unions, with the conclusions of the considerations expected on Wednesday.

The organisations said yesterday they will not shed light on the contents of the tentative agreement until the possible approvals.

The settlement will apply to most occupational groups in the municipal sector, including teachers, early-childhood educators, bus drivers, library workers and some social and health care employees – not including members of the Finnish Union of Practical Nurses (Super) and Trade Union of Social and Health Care Professionals in Finland (Tehy).

Super and Tehy in May pulled out of the collective bargaining negotiations in a bid to secure higher wage increases for their members. It is possible that their members will also receive the increases negotiated by the labour market organisations as it is difficult, if not impossible, to distinguish employees at workplaces based on union membership, according to Helsingin Sanomat.

Members of the nursing unions would not be bound by the obligation to maintain industrial peace, meaning they would be able to continue resorting to industrial action in pursuit of higher wage increases.

JAU and Juko have both called for assurances that any raises granted to nurses would also be granted to the rest of the municipal sector.

The calls had been the main obstacle to a settlement prior to the breakthrough on Monday.

Helsingin Sanomat wrote that KT has been concerned that if it came under significant pressure to promise substantial wage increases for nurses, the increases could spread across the municipal sector, raising employer costs. The organisation has thus demanded that the government guarantee that it will not allocate any additional funding for the increases of nurses.

The government has been reluctant to intervene in the dispute.