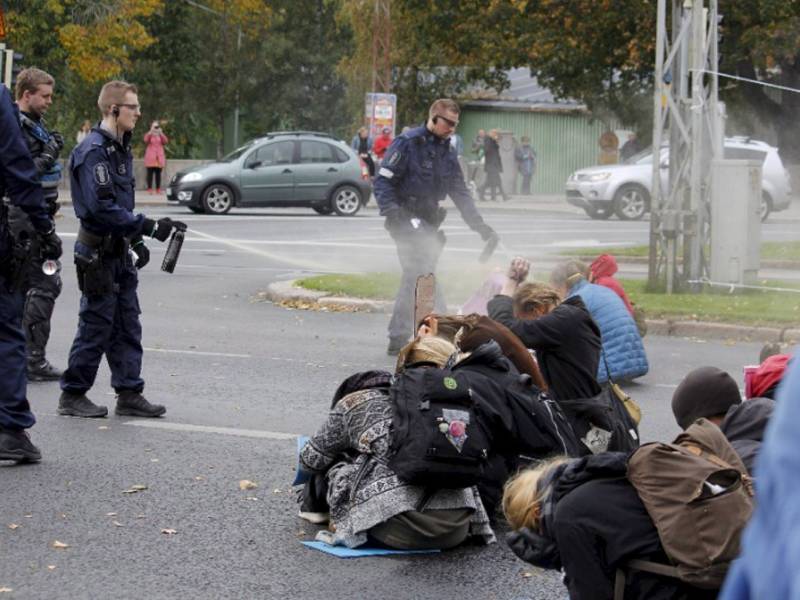 SEVEN POLICE OFFICERS have been charged for their actions against participants of a protest organised by Extinction Rebellion Finland in Helsinki in October 2020.

Deputy Prosecutor General Jukka Rappe on Friday announced he has brought charges of assault and violation of official duty against the officers for their use of forcible measures, namely pepper spray, in an attempt to break up the protest.

Altogether 16 protesters were pepper sprayed by police for refusing to stop blocking off traffic on Kaisaniemenkatu in Helsinki.

“The protesters sitting on the street didn’t cause any immediate danger and therefore the use of such force was indefensible. That’s why I contest that police exceeded their authority,” Rappe commented to Helsingin Sanomat.

He declined to comment on the accused in further detail but confirmed the information circulating in public that three of the accused are officers who deployed pepper spray on the protesters. He also stressed that it was critical, albeit painstaking, to determine the responsibility of officers at each level – from the general command to officers in the field – due to the suspected violations of official duty.

“From the perspective of official wrongdoing, this is a question of some level of the organisation viewing that it’s necessary to intervene in the protest and another level carrying out such an order,” he clarified to YLE.

Lasse Aapio, the chief of police at Helsinki Police Department, told Helsingin Sanomat that it took “unreasonably long” to bring charges against the officers. He reminded that in circumstances such as the protest officers must take into consideration the risks associated with the societal situation, rather than simply the actions of individual people.

“I’d point out that if people change places often, police must weigh up whether their future actions are predictable. That has to be taken into account in addition to the disturbance caused.”

Extinction Rebellion Finland held a protest in Helsinki on 3 October 2020 in an attempt to draw attention to the threat of the climate emergency and prompt the government to take meaningful action to mitigate its effects. Video shared by the organiser shows police officers deploying pepper spray against a group of protesters sitting in the middle of Kaisaniemenkatu.

The protesters had relocated there after blocking off traffic on a nearby street, in response to police officers starting to take them into custody.

Rappe reminded YLE that the disturbance caused by a protest for, for example, traffic must be unreasonably large to allow police to justifiably intervene with the protest.

“My impression is that the activity was short-lived enough that the requirement of unreasonability was by no means met. It’s a matter that’ll ultimately have to be evaluated by a court,” he commented. “A rule-of-law state must tolerate [protesters] blocking off a couple of lanes on Kaisaniemenkatu.”