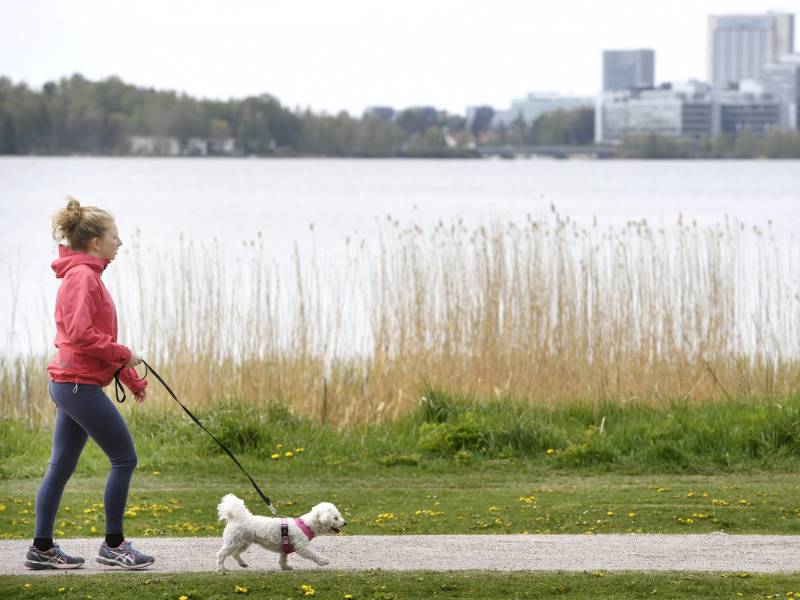 A woman walked a dog in Helsinki on 25 May 2020. Forecasts indicate that the warm weather of recent days will start making way for rains in parts of Finland on Thursday, 26 May 2022. (Heikki Saukkomaa – Lehtikuva)

TUESDAY is expected to be the warmest day of the spring so far, reports Helsingin Sanomat.

“Temperatures are highish in light of the season. Even if the high-temperature was broken on Monday, it wouldn’t count as it’s set to be even warmer on Tuesday,” Juha Föhr, the meteorologist on duty at Foreca, stated to Helsingin Sanomat on Monday.

The mercury rose above 20°C in a number of localities on Monday, including to 21.7°C in Kouvola and 21.6°C in Nurmijärvi.

Today is set to be even more summery, with the mercury climbing to 15–20°C in large parts of Finland. The thermometer is to read at least around 20°C in southern and western parts of the country and hover at around 15°C in regions near the eastern border and in Lapland. The 20°C-mark may come under threat also in south-western parts of Lapland.

“The weather will be a lot better for having a day-off or being on holiday than the rest of the week,” summed up Föhr.

Wednesday is forecast to be more overcast with the possibility of scattered showers in western parts, and overcast in eastern and northern parts of Finland. Temperatures are to remain in the 15–20°C range in southern and western regions, with the potential to hit 20°C in the area stretching from East Uusimaa to the Bothnian Bay and all the way to Lapland.

“That’s if you discount the snow cover, which cools down the air in parts of Lapland.”

On Thursday, the weather will remain sunny in eastern and northern parts, but become significantly more rainy in southern and western parts of Finland.

“The rains will no longer be local, but Thursday will simply be a rainy day in the south and the west. Because of the rains, it’ll also be cooler even though the air mass isn’t being replaced by anything,” said Föhr.

On Friday, a low-pressure system will have a clear impact on the weather as it moves south-west from the east, toward central and southern parts of Finland. Temperatures will remain between 10°C and 15°C in many parts of the country due to rains.

“We’re in for a small storm, but not quite snow,” told Föhr.

The centre of the low-pressure system will hover over south-western parts of Finland on Saturday, delivering rains to southern and western regions. The rains will be less severe and more isolated in the east and north.

Also Sunday is forecast to be rainy in the south, and new rain systems are forecast to arrive in eastern and northern regions.