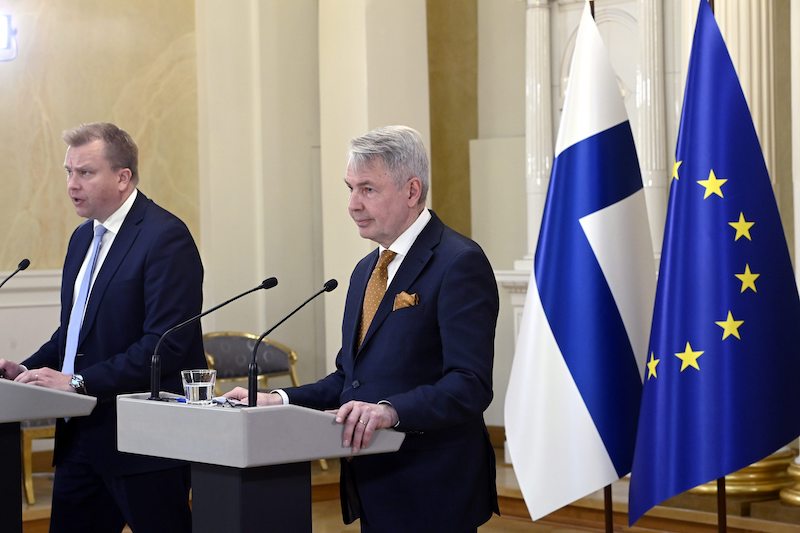 Defence Minister Antti Kaikkonen (L) and Foreign Minister Pekka Haavisto of Finland attend the press conference on Finland's security policy decisions at the Presidential Palace in Helsinki, Finland on May 15, 2022. Finland will apply for NATO membership.

The Committee emphasises that Finland’s accession is not directed against anyone, but it would strengthen Finland’s security. As a member of NATO, it is still important to continue active diplomacy and a foreign and security policy that promotes stability.

The Committee notes that Russia’s long-standing aggressive policies and the goal of dividing Europe into new spheres of influence took on a new dimension after the country’s invasion of Ukraine. Failure to respond would lead to a narrowing of Finland’s foreign, security and defence policy.

The committee report reviews Finland’s current defence solutions, cooperation arrangements and the role of the European Union as Finland’s most important community of values and security. The Committee states that national defence, based on conscription, a trained reserve, the defence of the entire country and high will to defend the country, is the basis of Finland’s defence in all circumstances.

Of the existing options to enhance security, NATO membership is considered to be the strongest possible additional protection for Finland due to its military deterrent. Finland does not need to set any preconditions for applying for NATO membership.

Seeking a new balance between Finland and Russia

The Committee notes that NATO membership will significantly change Finland’s relations and possibilities for cooperation with Russia. This will mean finding a new balance between Finland and Russia.

According to the Committee, it is important that there is a functional and professional way to cooperate with an important neighbour also in the future. In all circumstances, relations with Russia will remain a key national issue for Finland.

The Committee considered the Government reports and their parliamentary handling to be a good and justified procedure. It allowed Parliament to comprehensively discuss the change in the security environment after the Russian invasion of Ukraine. The government report and its parliamentary deliberations also ensure that it is possible to form a common, up-to-date national overall view of Finland’s foreign and security policy which is independent of election cycles and includes possible NATO membership.

For its report, the Committee received statements from ten other parliamentary committees. Next, deferral of the report will take place in a plenary session. This will be followed by single reading in a plenary session. If, during the debate, a motion is proposed which differs from the opinion of the committee report and which is supported, the matter shall be put to the vote at the end of the debate.​ Parliament will then notify the Government of its opinion in a parliamentary communication.