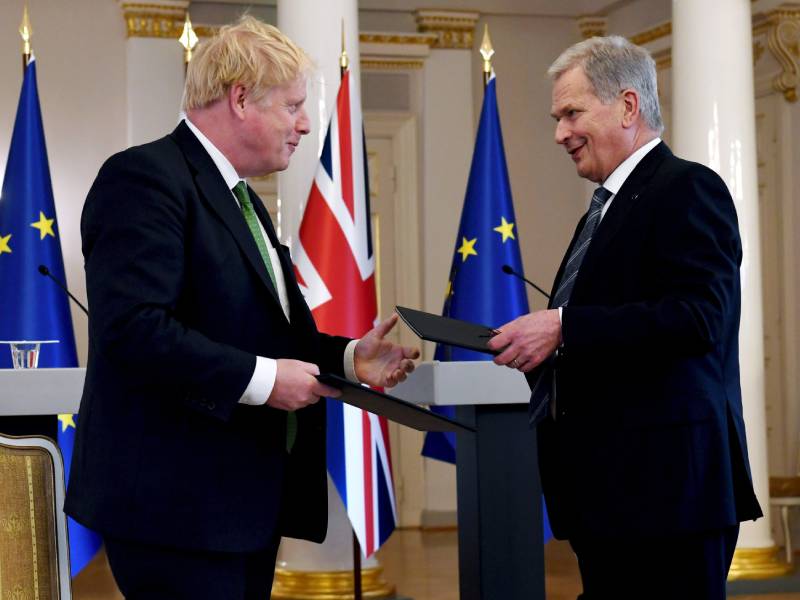 British Prime Minister Boris Johnson and Finnish President Sauli Niinistö exchanged copies of a declaration on defence and security co-operation that contains mutual security assurances to reinforce their security in the face of renewed threats. The heads of state met in the Presidential Palace in Helsinki on Wednesday, 11 May 2022. (Antti Aimo-Koivisto – Lehtikuva)

ALMOST THREE-QUARTERS (73%) of Finns believe Finland should apply for membership in Nato, reveals an opinion poll commissioned by Helsingin Sanomat. The share of respondents in favour of the membership has increased by eight percentage points in the past two weeks to an all-time high.

The notion of joining the defence alliance is opposed by 12 per cent of respondents, a drop of one point from late April.

The share of respondents who are unsure about their opinion on the issue decreased by seven points to 15 per cent.

Helsingin Sanomat has surveyed the public on the membership issue for as long as 20 years. The results are not fully comparable because the survey method was changed from phone interviews to an online panel in late February 2022.

Conducted in January, the last phone survey found unprecedentedly high support for the membership, with 28 per cent of respondents revealing they support Finland joining Nato.

The newspaper wrote yesterday that the typical supporter is an academically educated middle-aged or older man who works in a managerial or senior clerical position, earns over 85,000 euros a year and describes his politics as right-leaning.

Critical views on the membership are found especially among under 30-year-olds and women who are students or workers with no post-primary qualifications, earn less than 20,000 euros a month and lean left on the political spectrum. Also the majority of such respondents, however, support Finland joining Nato.

Support for the membership rose in the past two weeks especially among workers, people with annual earnings of less than 20,000 euros, people with no post-primary qualifications, members of the working class, students and supporters of the Greens and Social Democrats.

Supporters of the five other large parties are predominantly in favour of joining Nato.

The poll was carried out on 9–10 May by Kantar TNS.

President Sauli Niinistö and Prime Minister Sanna Marin (SDP) are scheduled to disclose their personal stance on the membership question in a joint press release at 10am on Thursday, 12 May. Information obtained by Helsingin Sanomat indicates that Finland and Sweden could submit their applications to join Nato as soon as early next week.