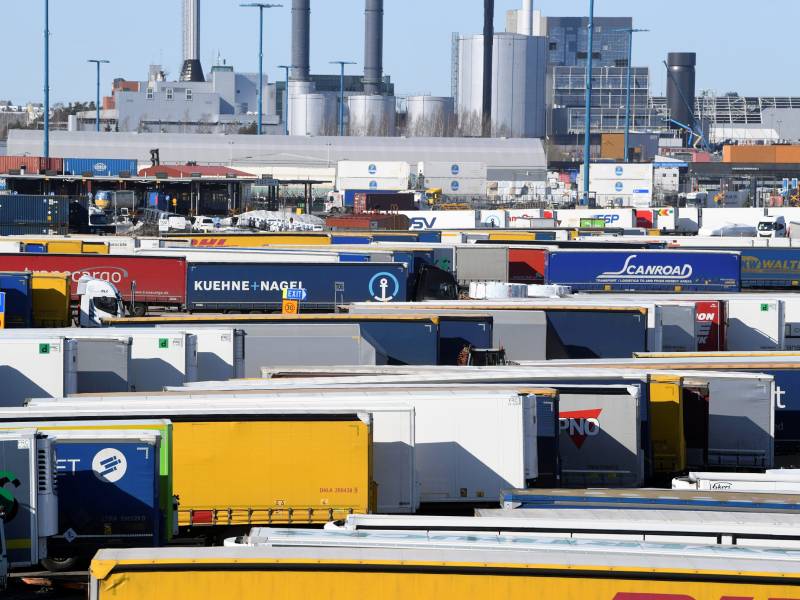 Lorries and shipping containers in the Port of Vuosaari in Helsinki on 11 April 2022. For Finland, the EU’s proposed carbon tariff mechanism would have an impact particularly on the imports of iron, steel and fertilisers from Russia. (Antti Aimo-Koivisto – Lehtikuva)

THE EFFECTS of the European Commission’s proposal for carbon emission tariffs on certain imports would be more positive on the Finnish than the average EU economy, indicates a study conducted by Etla Economic Research and the Finnish Environment Institute (Syke).

The overall impact on the national economy would be minimal, however.

The European Commission is proposing that the tariffs be levied on certain high-polluting imported goods, such as aluminium, cement, fertilisers and steel, in an attempt to encourage third countries to adopt greener production processes, prevent the so-called carbon leakage and to establish a more balanced market in the 27-country bloc.

In Finland, the tariffs would lead to a roughly 25-per-cent decrease in the imports of such goods from outside the union, according to Etla and Syke. Their impact would be significant particularly on the imports of iron, steel and fertiliser – all goods that have been sourced primarily from Russia.

Finland could also benefit slightly from the adoption of the so-called carbon border adjustment mechanism as it is a relatively large producer of iron and steel.

“When the EU’s external borders are closed with tariffs, Finland could secure a larger share of the steel market based on our analysis and this would have a positive impact,” Tero Kuusi, the research director at Etla, explained to YLE.

The beneficiaries, he summarised, would be sectors that manufacture goods covered by the mechanism for the internal market, as well as those manufacturing intermediary products for the sectors. Sectors that require aluminium, cement, iron, steel or fertiliser for their own production would contrastively be affected adversely by the price hikes the tariffs would bring about in Finland and the EU.

“The largest and most visible of these sectors are the engineering and electronics sectors, where steel products are particularly important,” said Kuusi.

Even though the tariffs could lead to drops of dozens of per cent in imports for some companies, they would not suffice to de-stabilise the economy in the bigger picture. The tariffs are to be levied on such a limited number of goods that their impact on total output would be measured not in per cents but per milles.

Researchers at Etla and Syke pointed out that targeting the tariffs as proposed would not be without its problems. The fact that they do not extend to end products, for example, means that a product that uses aluminium or steel could be produced in and imported from a third country without any for of compensation for emissions.

This could provide a competitive edge to high-polluting imports to the EU, said Kuusi.

“The solution would naturally be to expand the tariff mechanism at some point. But more complex products also complicate the process quite a lot. It’ll take a while before this system can be kick-started properly,” he stated to the public broadcasting company.

Another challenge arises from the abolition of free emission allowances that is part of the proposal: Exports from the EU could lose their competitiveness relative to high-polluting production taking place outside the 27-country bloc.

“This could divide the market so that emission-intensive production is distributed largely outside the EU and clean production is concentrated in the EU. And that’s obviously a bad scenario in a global sense.”

The problem, he added, could be tackled by targeting subsidies to the development of green technologies.

The carbon tariffs are to be implemented in 2026 as part of Fit for 55, the EU’s plan to reduce net greenhouse gas emissions by at least 55 per cent by 2030. The implementation would take place after a three-year transition period during which companies are asked to provide information about the emissions serving as the basis for the tariffs.