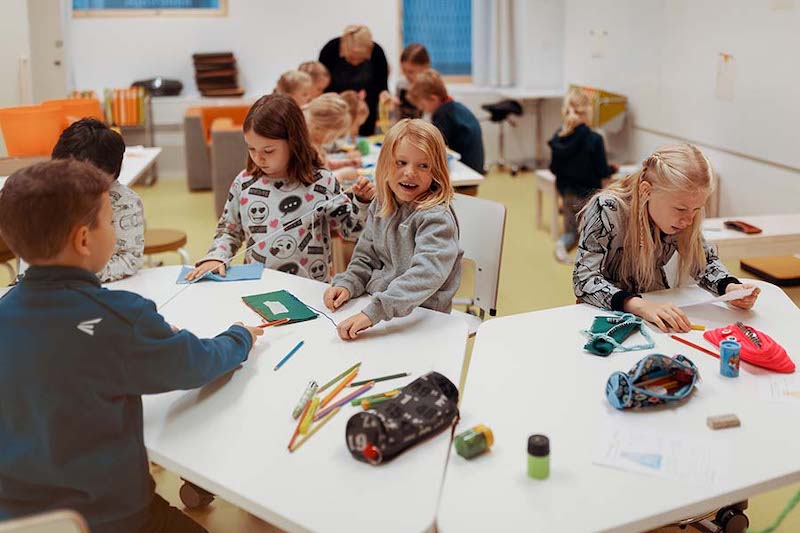 A recent enquiry shows that pupils and their guardians are satisfied with school and education. After-school activities for small schoolchildren received particularly good feedback.

This year, Helsinki basic education was assessed by first, fifth and eighth graders as well as their guardians. More than 8,700 pupils and nearly 4,000 guardians completed the enquiry.

The enquiry was conducted in municipal Finnish and Swedish-speaking schools, in special schools as well as in contractual schools (i.e. private schools that have a contract with the city to provide free-of-charge basic education) in February–March 2022.

Praise and congratulations to employees

- Even though we had trouble finding after-school activity places for everyone in the early autumn, the results are excellent. That is why I would like to thank and congratulate both our own employees and our partners for their good work at this point, says Niclas Rönnholm, Head of Swedish-speaking Basic Education.

The guardians' assessments of pupils' well-being, studies and learning support, learning environment and cooperation between home and school improved.

In questions related to studies and learning support, the guardians responded to statements such as "My child is challenged appropriately at school", "The learning materials used at school are up to date and sufficient" and "My child receives enough support for studies at school if necessary".

Guardians assessed the cooperation between home and school, for example, by telling whether the school actively informs them of its activities or whether it is easy to approach teachers in matters involving the child. On the topic of well-being, questions such as whether the child was treated respectfully at school, whether friendships were supported and whether bullying were asked.

- The guardians' good assessments show that we have done great and fruitful work at schools for the learning and well-being of our pupils. Many thanks to our teachers for doing a great job with their pupils every day, Outi Salo, Head of Basic Education, says thankfully.

The total score of the pupil enquiry was 5.5 on a scale of 1 to 7. The pupils' assessment of their chances to participate was 4.8. In practice, the result almost reached the same level as in 2020, which is surprising considering the coronavirus restrictions. Increasing the pupils' sense of participation will be further developed at schools.

In the section involving participation, the pupils responded to statements such as "I get to participate in planning common class and school events", "There are clubs that interest me at my school" or "I sometimes get to choose how to work during a lesson".

Studies and learning support received a score of 5.6, well-being 5.8, facilities and school environment 5.6 and the overall satisfaction 5.7. After-school activities scored best among the six categories, with a score of 6.1.

Studies and learning support remained unchanged compared to the previous enquiry, but the assessments regarding well-being and the learning environment experienced a slight decrease.

Over 2,700 open responses from pupils

In questions on facilities and the school environment, the pupils responded, for example, by describing how they experienced safety at school and whether lessons took place outside the school building.

The pupils also responded to questions, such as "What is particularly good about your school?" and "How could your school become even better?" Over 2,700 responded to the open questions in the previous enquiry and over 2,200 in the latter one.

- We are particularly delighted with the large number of responses. The pupils have made good use of their opportunity to make their voices heard. It is now up to us to hear their voices, Rönnholm emphasises.

The vast majority of responses to the guardians' enquiry came in Finnish, but responses also came in English, Swedish, Russian, Arabic and Estonian. Parents of first graders were the most active respondents.

The majority of pupils responded to the enquiry in Finnish. Over 700 responded in Swedish and over 200 in English.

First graders' responses were aided with the use of "smiley faces", and they were also asked about after-school activities in addition to school. The enquiry for fifth and eighth graders had a total of 23 statements, two open questions and one feedback question.

Results to be discussed at schools

Schools are about to receive their separate school-specific results soon. The schools will process their results under the direction of the principal and will inform the guardians about them.

The client enquiry is an important tool in the development of basic education in Helsinki. The results will be reviewed next autumn together with the pupils in schools as well as with the guardians in parent-teacher meetings.

- The biennial client satisfaction enquiry enables us to monitor the activities of schools and develop them both at the city level and separately for each school. Salo says.