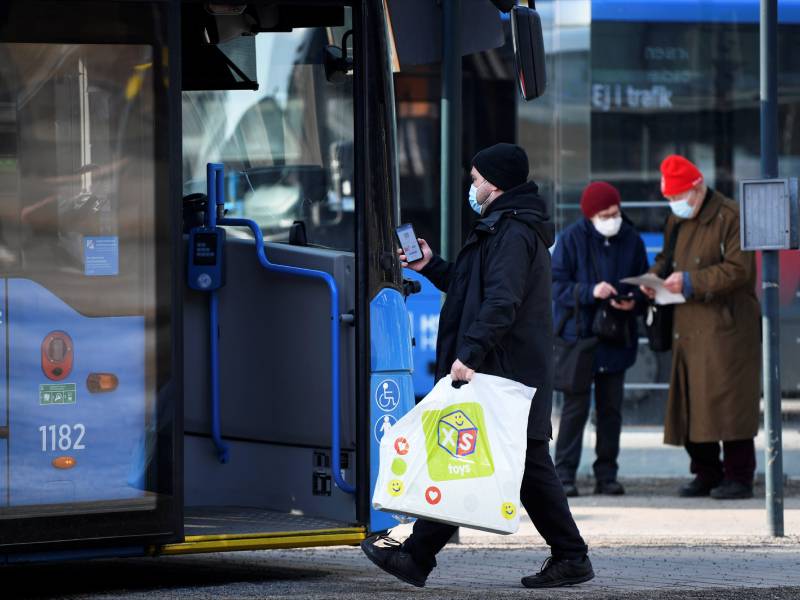 People with face masks in Helsinki on 23 March 2022. The Finnish Institute for Health and Welfare (THL) on Thursday announced an almost complete lifting of the mask recommendation that has been in effect for almost two years. The capital region will stand by its recommendation for the time being, according to the City of Helsinki. (Antti Aimo-Koivisto – Lehtikuva)

THE FINNISH Institute for Health and Welfare (THL) has lifted the general mask recommendation except for three circumstances.

THL on Thursday said it continues to recommend that face masks are worn in public indoor spaces and on public transport by people seeking testing or treatment due to a possible coronavirus infection, by people exhibiting respiratory symptoms and by people who know they have been exposed to the virus.

People with symptoms are advised to primarily stay at home until the symptoms subside.

The decision, it argued, is justified as the use of masks as an independent measure does not significantly prevent the virus from spreading in the prevalent epidemiological situation. Stopping the spread of the highly transmissible omicron variant would necessitate restrictive measures for which there is little support.

Although the recommendation has been updated, people will be allowed to use their own discretion to decide whether they should wear a mask in, for example, indoor spaces where avoiding close contact is difficult, underscored THL.

“Especially unvaccinated people who are 12 years or older and everyone who is at high risk of developing a severe form of the coronavirus disease regardless of vaccinations should consider wearing a mask that also protects its wearer effectively,” commented Otto Helve, a chief physician at THL.

Regional authorities can continue to impose regional recommendations on mask use.

The City of Helsinki on Thursday announced it will uphold its broad-based mask recommendation in the capital region in spite of the update by THL. The task force coordinating the regional response to the epidemic, it said, will re-examine the situation in the near future.

The recommendation also does not apply to workplaces or work settings where mask use is justified from the perspective of customer or occupational safety. The decisions on such settings will be made by employers based on both their own risk assessment and general guidelines provided by the Finnish Institute of Occupational Health.

Tommi Alanko, the head of occupational safety at the Institute of Occupational Health, told Helsingin Sanomat that it is impossible to provide blanket instructions on mask use at workplaces due to differences between workplaces.

THL’s broad-based mask recommendation was in effect for nearly two years, since August 2020.