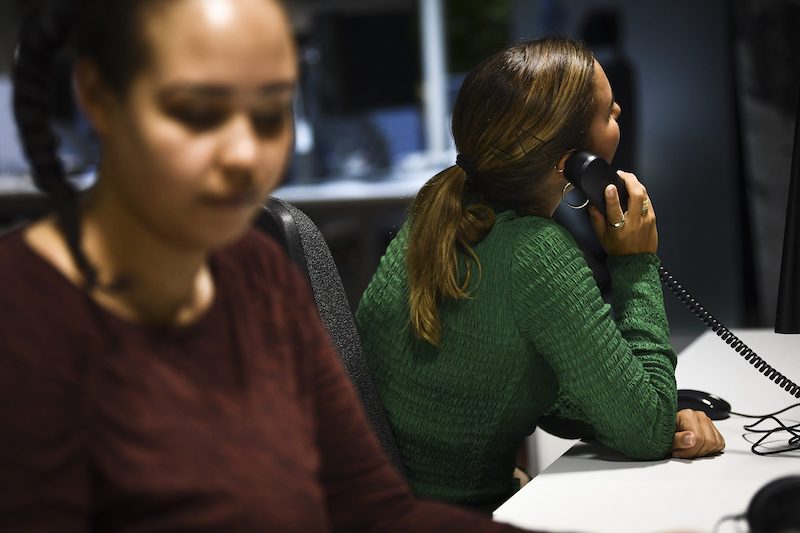 People working in an office in Helsinki on 14th of October 2021.

Public authorities in charge of control efforts against the shadow economy are very concerned with illegal practices connected to foreign workers. Last year, the units of Finland’s Regional State Administrative Agencies conducted some 1,600 control visits to business enterprises that employ foreign citizens. On average, the Agencies found at least one non-Finnish employee for every 5 control visits who did not have the right to carry out the work they were doing in Finland.

When we leave out other employers and look at the construction sector alone, the situation is even worse: whenever there were 3 checks carried out, the agency always found 1 construction company with foreign citizens that had not received the right to work in Finland.

– It is likely that the current circumstances in Ukraine will worsen the situation, so the number of illegal workers keeps on growing. The more we receive migrant workers in Finland, the higher the demands will be on Finnish public authorities, because we must control the foreign workers’ activity and make sure they have the legal right to work here, control the adequate legal wage levels, control the withholding of taxes and employers’ contributions, explains Janne Marttinen, Director of the Grey Economy Information Unit at the Tax Administration.

Finnish Regional Administrative Agencies have units in charge of occupational health and safety, which exercise control over foreign workers’ circumstances at places of work, including the existence of work permits and compliance with legal minimum wages and additional remuneration. For foreign citizens who have not been given the right to work but who still have accepted employment in this country, there is an increased personal vulnerability and a risk that a malicious employer takes advantage of them.

– During our control activity we often encounter workplaces where the wages paid to foreign citizens – who do not have the right to work – are below the minimum level under Finnish law. On the other hand, we also run into circumstances where it is difficult to ascertain what the actual terms and conditions of the work are. For this reason, when we visit places of work, we increasingly turn to the foreign citizens themselves and start talking to them, notes Riku Rajamäki from the Regional Administrative Agency for Southern Finland.

It is the Tax Administration’s responsibility, in turn, to perform the necessary control action to safeguard the national revenue that consists of employers’ taxes. Last year’s statistics on results from the exercised control indicate that the Tax Administration uncovered some 32 million euros of unreported payments of wages. However, a considerable part of the unreported employees are not identified during tax audits.

Detailed information and statistics on shadow economy issues are released today on the public authorities’ shared website: Preventionstatistics - Harmaa talous & talousrikollisuus (vero.fi). Not only the Regional State Administrative Agencies work with inspections and audits but also the Tax Administration, the Social Insurance Institution (Kela), the Finnish Customs, the Police, the Public Prosecutor’s Office, the Bankruptcy Ombudsman, the Enforcement Authority, the Accident Insurance Centre, the Employment Fund, Centres for Economic Development, Transport and the Environment, the Supervisory Authority for Welfare and Health (Valvira) and the Finnish Food Authority each have their own control activities aimed for combatting the shadow economy.

Control work in the field is important: new programs will soon be introduced in other business sectors to supplement the existing control action in the passenger transportation sector

In spite of the ongoing pandemic, the public authorities that combat the shadow economy were able to perform co-ordinated worksite inspections in the building sector.

– To carry out a visit in person is a significant deterrent, promoting the overall control directed toward illegal practices. During the first year of the pandemic, we made progress in other ways, including the methodologies of data analysis. Although these aspects of cooperation across administrative sectors improved and it has now become easier to choose the right company to investigate, there is nothing that could replace the powerful impact that live visits at the workplace can have, says Janne Marttinen, Director of the Tax Administration’s Grey Economy Information Unit.

During the final months of last year, the media devoted a lot of attention to the inspections that were carried out in the field in order to verify the compliance of taxicabs. The authorities that cooperated were the Finnish Transport and Communications Agency Traficom, the Tax Administration, and the regional units in charge of occupational safety.

– The compliant companies of the sector are the ones that reap the major benefits from our control action. When everyone can see that fraudsters tend to get caught/When there are consequences to breaking the rules, there is justice in our society. The completed inspections and audits also reduce the tax gap in Finland, says Janne Marttinen.

Working together, the public authorities will soon implement a new approach to the abusive employer practices related to foreign workers. The Police will lead the coordinated control effort. We will try out the new approach in industries that have many foreign workers: this means large construction sites, berry farms, and the house-cleaning sector. This is part of the Finnish Government’s program to combat the shadow economy.

Facts: Highlights of the 2021 statistics on control activities