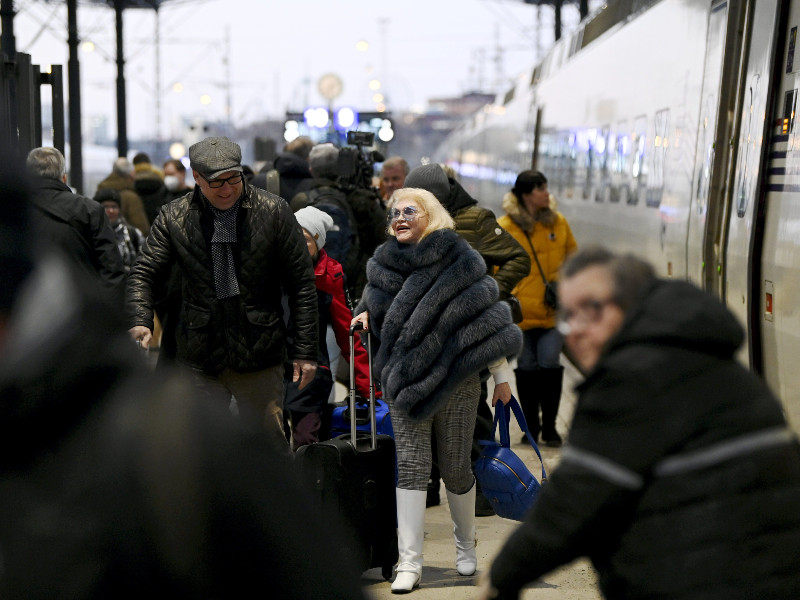 A NUMBER of Russians have left Russia over concerns about the rumoured declaration of martial law and the impact of crippling economic sanctions.

With scheduled flights out of the country suspended except for Turkey and the United Arab Emirates, many have turned their attention to the rail service operated between the Finnish capital of Helsinki and St. Petersburg by VR, the Finnish state-owned railway company.

YLE and Helsingin Sanomat wrote last weekend that in the coming days there are virtually no available seats on VR’s Allegro trains from St. Petersburg to Helsinki.

Allegro is presently the only regular rail connection from Western Russia to Europe, according to YLE. VR stated to the public broadcasting company that it is looking to increase services on the route due to the high demand, underlining that it is doing its due diligence to make sure the services are safe.

“On at least a couple of days next week, we’re looking to have an extra Allegro service between St. Petersburg and Helsinki,” Lauri Sipponen, the CEO of VR Group, stated to YLE on Saturday.

“We’re in daily contact with the Ministry for Foreign Affairs and other authorities, and we’ve been assured that we can continue the service safely. If the service was under any kind of security threat, we wouldn’t be operating to St. Petersburg.”

Despite the demand from St. Petersburg to Helsinki, the route is not particularly profitable, according to Sipponen. “The trains going the other way are practically empty. It isn’t a good situation economically for VR, but we’re performing our societal service obligation,” he explained.

Also fully booked are coaches from St. Petersburg to Helsinki, Riga and Tallinn, according to YLE.

Russian President Vladimir Putin on Saturday said during a television appearance that he has no plans to declare martial law in Russia, a move that could give him virtually absolute power to ramp up what is already a harsh clampdown on anti-war dissent.

Thousands of people have been detained in anti-war protests held across the country since 24 February, the first day of the invasion of Ukraine by Putin’s Russia. Also press freedoms have been restricted severely, with news outlets prohibited from referring to the invasion as attack, invasion or war.

Darya Gulik, a project manager at the Finnish Association of Russian-speaking Organisations (Faro) told Helsingin Sanomat she has received dozens of messages from Russians requesting assistance with travelling to Finland. Most of the messages are from people who have relatives in Finland or elsewhere in Europe.

“People are fleeing the sanctions as they’re afraid that it’ll become impossible to have a normal life in Russia,” she said. “They want to get out and see their relatives now, before the borders are possibly closed completely.”

Even more Russians may be interested in leaving, but not everyone can afford to travel or has a valid visa, according to Helsingin Sanomat. “Everyone leaving for Europe has recently travelled. It’s currently difficult to get a new travel visa,” told Gulik.

Canada on Saturday advised its citizens to leave Russia, warning that the security conditions were unpredictable and susceptible to rapid deterioration. Also the UK and US issued similar advisories to their citizens in Russia.