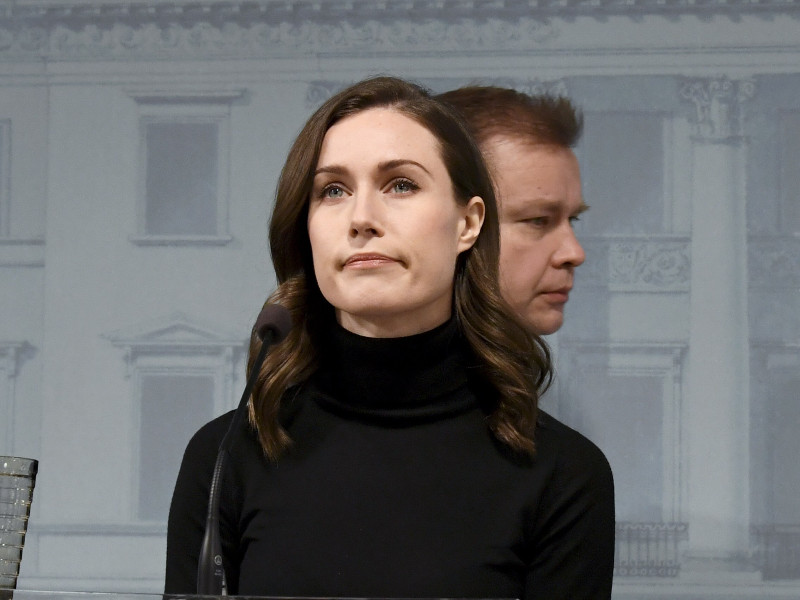 Prime Minister Sanna Marin (SDP) and Minister of Defence Antti Kaikkonen (Centre) prepared to host a press conference about a package of lethal aid to be sent from Finland to Ukraine in the Government Palace in Helsinki on Monday, 28 February 2022. (Jussi Nukari – Lehtikuva)

FINLAND on Monday announced it will donate 2,500 assault rifles, 150,000 cartridges for the rifles, 1,500 single-shot anti-tank weapons and 70,000 combat ration packages to Ukraine.

“This is a historic decision,” stated Marin.

President Sauli Niinistö described the decision as a deviation from established tradition on YLE A-studio. The justification for dispatching additional aid, he added, is simple: the Ukrainian people are faced with an emergency and need assistance.

“This marks a deviation from tradition and the inscription in the government programme that Finland won’t export weapons to countries waging war. But this doesn’t make us a party to the war,” he commented. “You have to understand that the inscription was originally intended to prevent the use of weapons for offensive purposes. This is a different kind of situation.”

The Ministry of Defence has compiled information on the defence materiel to be donated following the submission of an extensive list of materiel needs to the EU by Ukraine on Wednesday. Kaikkonen said the preparatory work took into account various perspectives, including the wishes of Ukraine and the materiel needs of Finland.

He described the materiel as stock goods, adding that at least the single-shot anti-tank weapons, as well as the composite helmets and bulletproof vests pledged a day earlier, will be replaced.

The ministers provided little details about how the weapons and ammunition are to be shipped, saying only that discussions about the shipment have been held with, for example, the UK. Kaikkonen said Poland will have a key role in the delivery given its geographical proximity to Ukraine.

The shipment is expected to leave Finland on Wednesday. Countries around the world have continued to pledge both lethal and non-lethal aid to support the resistance mounted by Ukraine against the invasion by Russia.

Reports have also continued to pour in of indiscriminate attacks—that is, attacks that strike military objectives and civilian objects without distinction—carried out by Russia in Ukraine. Russia is also said to have used cluster munitions, explosives that disperse smaller sub-munitions over wide areas, and thermobaric weapons, explosives that ignite the surrounding air to produce a lethal shock wave.

Cluster munitions are prohibited under the Convention on Cluster Munitions, the 110 parties to which include neither Finland, Russia, Ukraine nor the US. International humanitarian law, meanwhile, prohibits means and methods of warfare that can cause superfluous injury or unnecessary suffering, as well as obliges all conflict parties to distinguish between military objectives and civilian objects.

“The Russian military has shown a blatant disregard for civilian lives by using ballistic missiles and other explosive weapons with wide-area effects in densely populated areas. Some of these attacks may be war crimes,” Agnés Callamard, the secretary general of Amnesty International, stated on Friday.

Karim Khan, the prosecutor of the International Criminal Court (ICC), on Monday announced he has decided to proceed with opening an investigation into the situation in Ukraine.

“Given the expansion of the conflict in recent days, it is my intention that this investigation will also encompass any new alleged crimes falling within the jurisdiction of my office that are committed by any party to the conflict on any part of the territory of Ukraine.”

“I have already tasked my team to explore all evidence preservation opportunities.”

The ICC is empowered to investigate and prosecute war crimes, crimes against humanity, genocide and the crime of aggression.