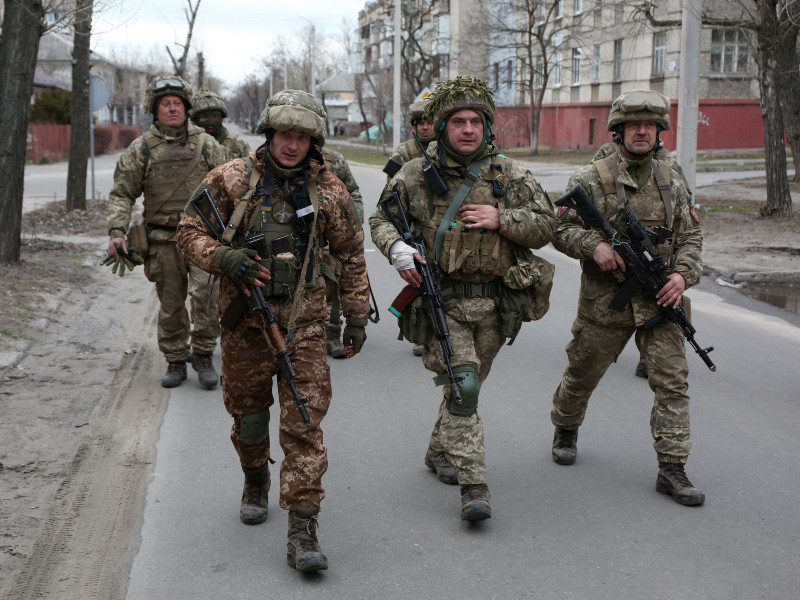 Servicemen of the Armed Forces of Ukraine walked in Syeverodonetsk, a small town in eastern Ukraine, on Sunday, 27 February 2022. (Anatolii Stepanov – AFP/Lehtikuva)

FINLAND has decided to send more aid to Ukraine.

Minister of Defence Antti Kaikkonen (Centre) on Sunday revealed Finland will send 2,000 composite helmets and 2,000 bulletproof vests to support the troops resisting an invasion by Russia. The country will also send 100 stretchers and equipment for two emergency medical care stations to Ukraine.

The Ministry of the Interior is presently preparing a package of humanitarian material, such as tents and medical protective equipment, to be sent in the coming days through the EU’s Civil Protection Mechanism.

Finland on Sunday also gave Estonia a licence to export artillery and ammunition acquired earlier from Finland to Ukraine. Germany, which originally sold the equipment to Finland, granted its permit for re-exporting the howitzers earlier last weekend.

Kaikkonen added that Finland has not ruled out the possibility of providing direct military aid to Ukraine. “This will be weighed up and looked into in the coming days,” he stated to Helsingin Sanomat.

Countries such as Germany and Sweden already pledged defensive weapons and other military equipment, the latter doing so for the first time since it sent aid to Finland during an invasion by the Soviet Union in 1939.

The European Union on Sunday agreed to provide about 500 million euros in weapons and other aid to Ukraine, a move it described as a watershed moment for the 27-country bloc.

“For the first time ever, the EU will finance the purchase and delivery of weapons and other equipment to a country that is under attack,” highlighted Josep Borrell, the EU’s High Representative for Foreign Affairs and Security Policy.

The majority (90%) of the package consists of lethal arms and 50 million euros of non-lethal supplies, such as fuel and protective equipment.

The EU has also ramped up its sanctions against Russia, as well as Belarus. The bloc said yesterday it will close its airspace, proposing a prohibition on all Russian-owned, Russian-registered or Russian-controlled aircraft. The Kremlin’s media machine, namely Sputnik, Russia Today (RT) and their subsidiaries, will be banned from spreading their “toxic and harmful disinformation” to justify the war and sow division in the EU.

Finnish Minister of Transport and Communications Timo Harakka (SDP) on Sunday tweeted that Finland is preparing to close its airspace for Russian air traffic.

The union stated a day earlier that it is prepared to exclude key Russian banks from Swift, a global system facilitating financial transactions between banks based in Belgium. The Russian Central Bank, in turn, will be prevented from deploying its international reserves to circumvent the sanctions and will see all its assets frozen to prevent it from supporting the war waged by President Vladimir Putin.