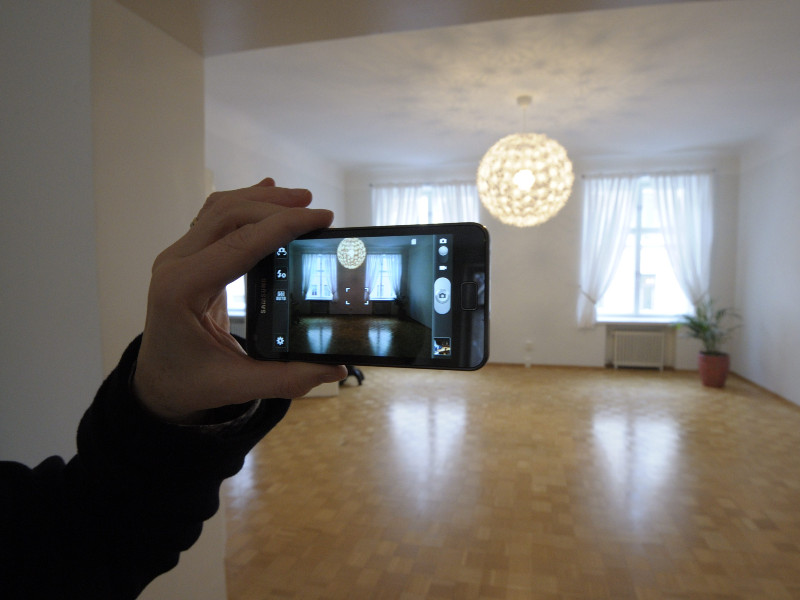 A woman took a photo of an empty room during a house viewing in Helsinki in 2012. (Markku Ulander – Lehtikuva)

THE PAST 10 YEARS have been kind to mortgage borrowers. Borrowing has been enormously popular as borrowers have hardly had to pay any interest on their housing loans.

Pasi Kuoppamäki, the chief economist at Danske Bank, on Tuesday told Helsingin Sanomat that the stock of housing loan has grown significantly particularly in recent times, as borrowers have been taking out loans that not only are larger but also have longer repayment periods than previously.

“The situation has been fairly beneficial from the perspective of mortgage borrowers in recent years. Euribor rates have been in negative territory and that has basically meant that the floor rate has been zero in most loan contracts. Mortgage borrowers have practically only been paying the margins,” he explained to the newspaper.

The interest on a housing loan is comprised of the reference interest rate and the margin charged by the lender. The margins on housing loans tend to vary on a borrower-to-borrower basis, standing at an average of 0.75 per cent at the end of 2021, according to Bank of Finland.

Some signs of a turnaround have emerged, however. The Euribor rate with a maturity of 12 months, the most popular reference rate for housing loans in Finland, has risen significantly since Friday.

Economists have urged borrowers to brace themselves for an increase in interest rates in the coming years. Although the expectations remain somewhat cautious, even a slight increase in the reference rate can have a major impact on the financial standing of a borrower.

“Especially when it comes to larger housing loans with a long repayment period, even a small increase in interest rates is significant,” Kirsi Välimäki, head of unit at OP Financial Group, said to Helsingin Sanomat.

“A rise in interest rates looks to be closer than before due to accelerating inflation,” she said.

Olli Rehn, the Governor of the Bank of Finland, on Friday stated to Helsingin Sanomat that the European Central Bank (ECB) is to raise its key interest rate no later than next year. Klaas Knot, the President of the Dutch Central Bank, on Sunday said to Reuters that he expects an increase of 0.25 percentage points as soon as in the last quarter of 2022.

The statements have already prompted a re-alignment of expectations in Finland.

Kuoppamäki told Helsingin Sanomat that Danske Bank has consequently adjusted its expectations for an interest-rate hike by the ECB. “Our thinking is that the first raise is expected at the end of this year,” he said.

Juho Kostiainen, an economist at Nordea, gauged that the 12-month Euribor rate could rise above zero by the end of this year. “According to the market expectation, the rate would rise to 0.8 per cent by the end of next year,” he said.

The rate closed at -0.31 per cent on Monday, 7 February, having stayed below zero since February 2016.

Kostiainen added that households should prepare for interest rates as high as two to three per cent, especially if inflation continues to accelerate. While Kuoppamäki voiced his doubt that the rates could rise as high this year or next year, he did not rule out the possibility in the slightly longer term.

“If we’re talking about a five-year outlook, then it’s probably a completely realistic thought that interest rates could rise to such a level,” he said.