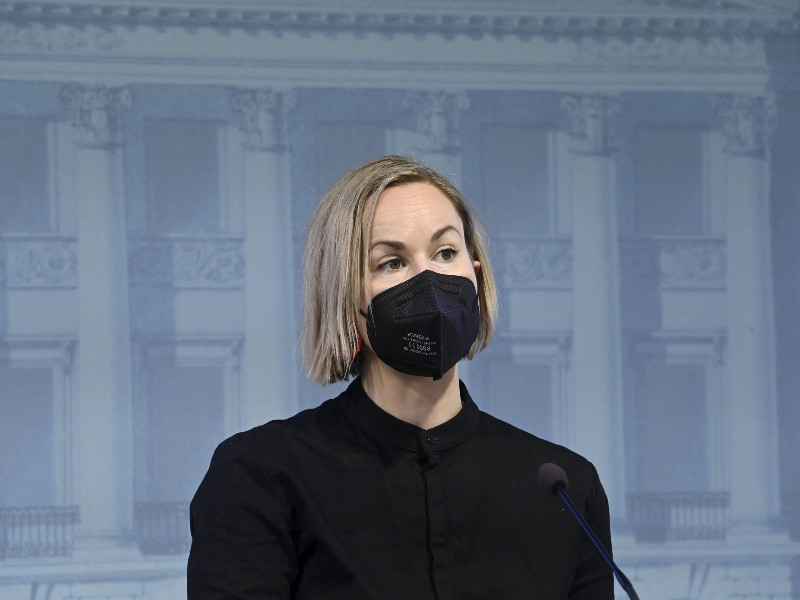 Minister of Social Affairs and Health Hanna Sarkkinen (LA) announced the decisions and recommendations made by a ministerial task force to ease the restrictions in place to curb the spread of the new coronavirus in a news conference in Helsinki on Thursday, 27 January 2022. (Heikki Saukkomaa – Lehtikuva)

THE FINNISH GOVERNMENT on Thursday announced it is relaxing its restrictions on restaurant operations.

No changes were introduced to the capacity restrictions and hygiene protocol requirements of restaurants, meaning food restaurants will have to cap the number of customers at 75 per cent and alcohol restaurants at 50 per cent of full capacity.

The restrictions will be revisited no later than in the second week of February, according to Minister of Social Affairs and Health Hanna Sarkkinen (LA).

She reminded in a news conference that although the epidemic is believed to have reached its peak, the epidemiological situation remains subject to pronounced regional variation. “It’s too early to set any firm timetables for tearing down the restrictions, but in conjunction with the upcoming coronavirus strategy update we’re trying to provide an outlook for the coming months and exiting these restrictions.”

The government is expected to discuss updating its coronavirus strategy in the coming weeks.

The coronavirus passport will remain on the shelf at least until 15 February. The government reminded in a press release yesterday that even though restaurants have the right to use the passport as an entry requirement, doing so does not absolve them from the restrictions on capacity or serving and opening hours.

The Finnish Institute for Health and Welfare (THL) has estimated that the passport, as it is presently constructed, is incapable of slowing down the spread of the omicron variant.

The government also recommended that municipal authorities and regional state administrative agencies to lift the prohibition on low-risk events and venues – such as gyms, theatres, museums, libraries, art exhibitions, amusement parks and swimming halls –  on 1 February.

Local and regional authorities can determine independently whether to heed the recommendation.

“The ministerial task force on the coronavirus pandemic wants to de-regulate low-risk venues and events, such as theatres and gyms, to especially increase cultural and exercise opportunities. We’re returning from a complete shutdown to a system where regional state administrative authorities are advised to assess more lenient restrictions based on the disease situation,” commented Sarkkinen.