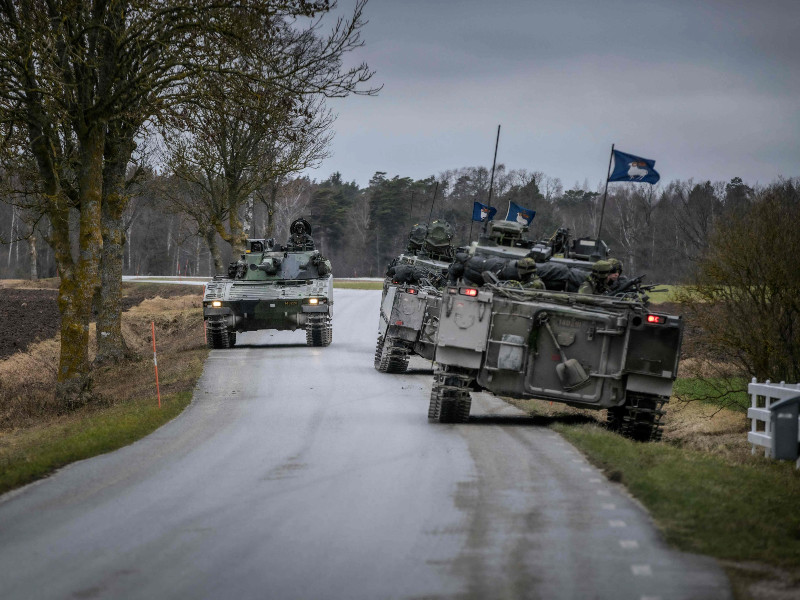 Armoured vehicles on a road in the northern parts of Gotland, the largest island of Sweden, on 16 January 2022. Sweden has deployed armed soldiers and armoured vehicles to patrol the island in response to “increased Russian activity” in the Baltic Sea. (Karl Melander – AFP/Lehtikuva)

THE FINNISH DEFENCE FORCES has raised its readiness in light of rising tensions in the security environment of Finland.

The Finnish Defence Forces, he stressed, is constantly monitoring the environment.

“That’s obviously the case also now. It’d be unnatural if we didn’t adjust our preparedness whenever necessary based on our observations,” he stated.

Huusko reminded that enhancing the level of readiness comprises not only daily and weekly adjustments, but also the longer-term development effort initiated in the aftermath of the annexation of Crimea by Russia in 2014. Finland has, for example, introduced amendments to the territorial surveillance act and established dedicated readiness units since the event.

The act was amended to allow the use of force in response to violations of territorial integrity also against military state actors of unidentified origin.

The most recent readiness adjustments have been linked to the demands presented to Nato and the United States by Russia in December. Russia demanded that the military alliance stop its eastward expansion as it continued to deploy troops near the borders of Ukraine. The country appears to have accelerated the deployments after a week of ultimately fruitless diplomatic engagement with the US.

Six Russian naval landing ships were recently sighted in the Baltic Sea, fuelling speculation about a possible invasion of Ukraine. Sweden responded to the sighting by increasing its presence on its largest island, Gotland.

Huusko said Finland’s security environment is in an unstable and difficult-to-predict situation but cautioned against drawing conclusion based on the landing-ship sighting, for example. The ships, he explained, are suitable also for a number of other uses besides landing and their use depends on the mission assigned to them.

The ships were leaving the Baltic Sea on Wednesday.

“We have to tie our observations about events to a longer-term assessment of the situation. This work is ongoing and the situation picture is monitored constantly,” he said.