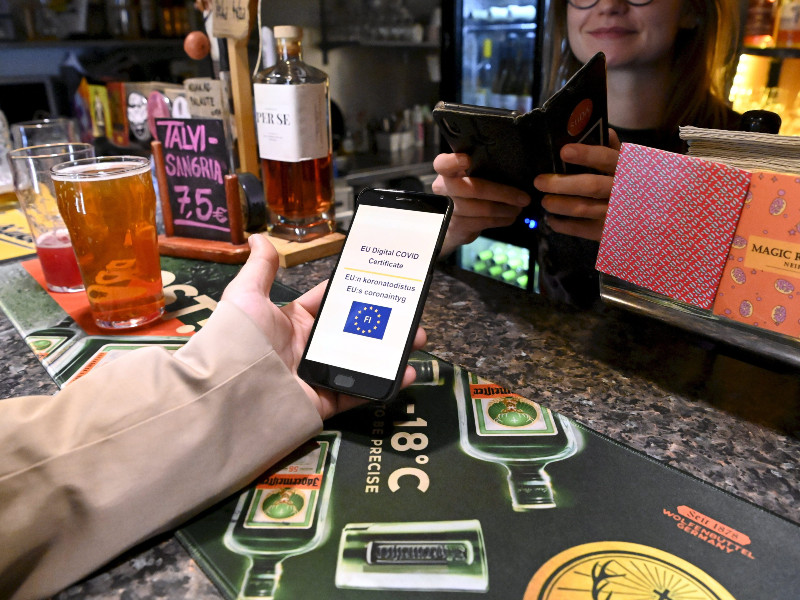 A patron showed their digital coronavirus passport at the counter of a pub in Helsinki on 5 November 2021. (Jussi Nukari – Lehtikuva)

THE FIRST ITERATION of Finland’s Covid-19 passport was short lived because the omicron variant proved capable of breaking through vaccine-induced immunity.

This deprived the passport of its rationale, as people who had acquired the passport by testing negative for the coronavirus were susceptible to contracting the virus from vaccinated people in settings such as bars and nightclubs and developing severe symptoms.

The Finnish government earlier this week invited experts to comment on whether the passport should be re-designed into a vaccine passport by making it available only to fully vaccinated people and, possibly, to people who have recovered recently from Covid-19.

The preparatory work has only begun and little details have emerged about the approach taken by the government. It is nonetheless already clear that the project entails significant legal challenges, Prime Minister Sanna Marin (SDP) acknowledged on Tuesday. Her assessment was echoed a day later by Pasi Pohjola, the director of strategic affairs at the Ministry of Social Affairs and Health.

Tomi Voutilainen, a professor of public law at the University of Eastern Finland, expressed his reservations about the vaccine passport to YLE on Wednesday, citing the rights of people who have recovered from Covid-19. It is difficult, he explained, to justify limiting basic rights for people who have natural immunity against the virus.

“What’s the justification for making people get vaccinated if they are protected against the coronavirus disease by virtue of having had the disease?”

Gaining access to rights simply cannot be the grounds for vaccinations, according to Voutilainen. “The vaccine passport would create more problems. You’d be forcing people to get vaccinated without necessarily any medical reason for doing so.”

Some practical problems would also arise from the fact that at-home tests are not considered sufficient proof of recovery and that access to laboratory testing has been limited. “It’s a problem that a national decision has been made that not everyone who has symptoms can get tested. Not everyone receives formal confirmation of whether they had the coronavirus or not,” he pointed out.

Lasse Lehtonen, the head of diagnostic services at the Hospital District of Helsinki and Uusimaa (HUS), stated to the public broadcasting company that he is principally supportive of the passport as a means to raise vaccine uptake among the population.

“Every country is striving to get vaccine uptake as high as possible. Vaccinations are a key way to prevent diseases and their promotion even with the coronavirus passport is an acceptable objective,” he viewed on YLE Radio Suomi on Wednesday.

The legal challenges are largely self-inflicted, according to Lehtonen. The European Union’s regulation on the digital green certificate, he reminded, does not dictate what is sufficient proof of recovery from the disease.

“The EU regulation leaves some latitude as to how it should be demonstrated,” he said.

“Finland has adopted a strict stance and demanded that the disease is demonstrated with a PCR test. But that’s our national decision.”

Lehtonen also viewed that booster vaccinations would be the ideal means to obtaining the passport given the strain requests for proof of recovery could put on the health care system. The Finnish Institute for Health and Welfare (THL) has estimated that in some circumstances people could get vaccinated as soon as a couple of months after recovering from the disease.

“I don’t think it’s purposeful that health care resources are used to write certificates, but I’d rather encourage people who’ve had the disease to get vaccinated if they need [the passport] to travel,” he stated to YLE.