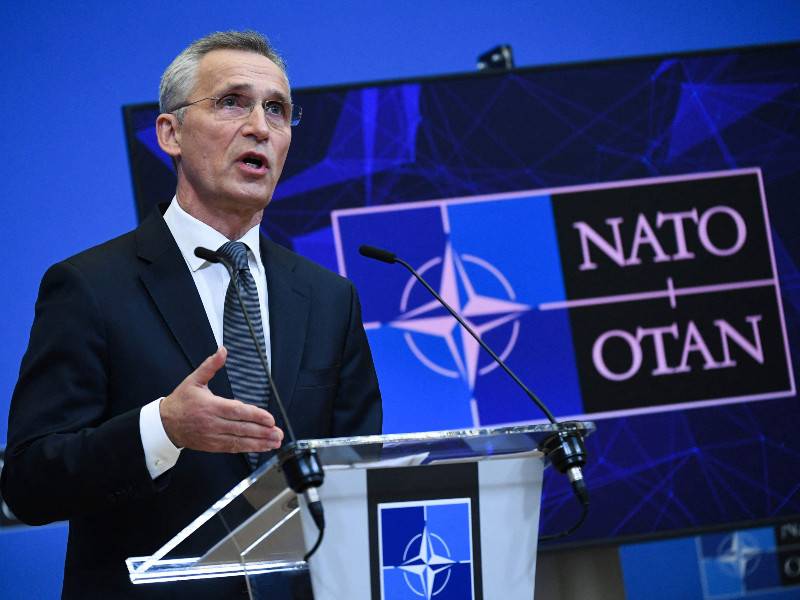 Jens Stoltenberg, the secretary general of Nato, talked at a press conference after the defence alliance’s foreign ministers had sat down to discuss the tensions between Russia and Ukraine in Brussels on 7 January 2022. (John Thys – AFP/Lehtikuva)

OVER A QUARTER (28%) of Finns are for and 42 per cent against the notion of Finland joining Nato, reveals a survey commissioned by Helsingin Sanomat.

The share of respondents who are supportive of the notion has jumped by eight percentage points since the previous iteration of the survey about two years ago – to its highest level, albeit by an only narrow margin, in two decades.

Helsingin Sanomat has enquired members of the public about their views on the defence alliance a total of 23 times since 2002.

Another major change is that the share of uncertain respondents has jumped to 30, possibly because the debate surrounding the membership was particularly lively during the survey period, between 3 and 16 January.

Almost a quarter (24%) were unable or unwilling to comment on the matter.

Helsingin Sanomat on Monday highlighted that the survey period followed or coincided with a number of factors that could possibly explain the results.

Russia in mid-December tabled a series of demands to Nato and the US, including that the defence alliance stop its eastward expansion in Europe. Russia has also sparked concerns and media discussion about a possible large-scale military invasion by deploying troops at the borders of Ukraine.

The interviews were also conducted partly during what was dubbed a super week of diplomacy between Russia and the US.

Finnish President Sauli Niinistö, meanwhile, estimated in his widely publicised new year’s address that Finland can apply for membership in Nato. Other Finnish politicians have also come forward with their views about the membership, some announcing they have re-aligned themselves to support it.

Supporters of the National Coalition were the most supportive of joining Nato, with 48 per cent for and 35 per cent against the notion, according to the survey by Helsingin Sanomat. Another group of respondents that was relatively welcoming of the notion were supporters of the Green League, with 35 per cent supporting and 33 per cent opposing the membership.

Supporters of the Left Alliance, by contrast, were dubious about the notion, with only seven per cent supporting and 70 per cent opposing it.

Opinions about the issue have evolved particularly among supporters of the Green League. The share of those supporting the membership rose from 12 per cent in 2019 to 35 per cent in 2022. Almost a half (49%) of the party’s supporters viewed that Finland should follow Sweden to Nato, representing an increase of 19 points from 2019.

Supporters of the Centre have similarly become more welcoming of the idea, with the share of those in favour of the membership more than doubling, from 13 to 27 per cent, since 2019.

Helsingin Sanomat reminded that a similar shift in opinions was detected after Russia annexed Crimea in 2014. The share of respondents supporting the membership jumped from 18 to 27 per cent, while the share of opponents fell from 64 to 57 per cent.

More than 1,000 people were interviewed for the survey between 3 and 16 January by Kantar TNS.