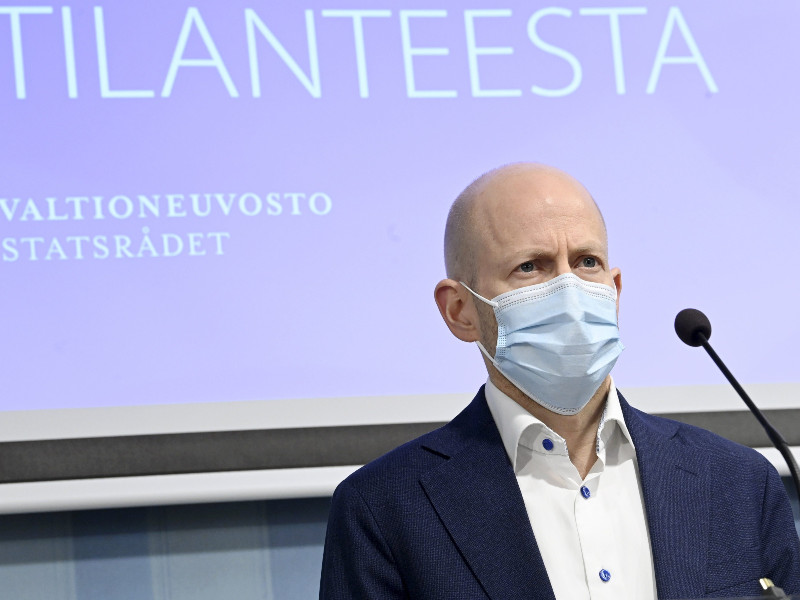 Otto Helve, a chief physician at the Finnish Institute for Health and Welfare (THL), was photographed at the weekly coronavirus briefing held by THL and the Ministry of Social Affairs and Health in Helsinki on Thursday, 13 January 2022. (Markku Ulander – Lehtikuva)

THE FINNISH INSTITUTE for Health and Welfare (THL) has revised its quarantine guidelines to allow physicians of infectious diseases to order quarantines with a duration ranging from five to ten days, instead of strictly ten days.

“The quarantine instruction is now for a duration of 5–10 days,” Otto Helve, a chief physician at THL, stated in Helsinki on Thursday.

THL on Thursday also unveiled its new instructions for people who have contracted or come into contact with the coronavirus in the face of many regions scaling down their testing efforts. People, it said, generally do not need to get tested if they are healthy, in good overall condition and experiencing mild respiratory symptoms.

“THL is nonetheless recommending that you voluntarily avoid contact to everyone outside your household for at least five days,” it added in a news release.

If the symptoms last for more than three days, people should continue to avoid contact to others for another two days after the disappearance of symptoms. THL also stated that people should always adhere to local instructions should they differ from its instructions.

People exposed to the virus – that is, people living in the same household with someone who has tested positive and people who have come into close contact with someone who has received a positive result from a laboratory test – should avoid contact to the extent possible until five days has elapsed since the infected person began to exhibit symptoms.

In households with several confirmed cases, the days are counted from the time the last infected person developed symptoms.

Exposed people should additionally wear a mask outside the home and, if possible, work remotely. If they have no symptoms whatsoever, they can go to work while wearing a mask and avoiding close contact. Asymptomatic children, meanwhile, can go to school or kindergarten as soon as five days has elapsed since the infected parent or sibling first exhibited symptoms.

Officials at THL and the Ministry of Social Affairs and Health on Thursday reported that more intensive care periods than ever before during the coronavirus pandemic started between 3 and 9 January. On Wednesday, a total of 68 people were in intensive care, 311 in special healthcare and 330 in the inpatient units of basic health care with the coronavirus disease.

The number of new cases has nearly tripled compared to December.

“The incidence rate is the highest we’ve seen and even it isn’t a reflection of reality,” commented Otto Helve, a chief physician at THL.

The fact that some 30 per cent of tests came back positive in the past two weeks, he explained, suggests that a large share of infections are left undetected.

The omicron variant has become the dominant variant in Finland. While infections are detected in high numbers also among the vaccinated, they do not lead to intensive care admissions as often as those among the unvaccinated, told Liisa-Maria Voipio-Pulkki, a senior specialist at the Ministry of Social Affairs and Health.

“Being unvaccinated is still the biggest risk factor for a coronavirus disease requiring intensive care,” she stated.

“There are staggering numbers of symptomatic people with the infection, but the share of severe forms of the disease would be a lot higher had the booster vaccinations progressed as well as they have.”

No definite data is yet availability on the severity of the disease caused by the omicron variant. Hospitals in Finland are nonetheless preparing for the eventuality that the burden will continue to grow.

“We haven’t yet reached the epidemic’s peak,” said Voipio-Pulkki.