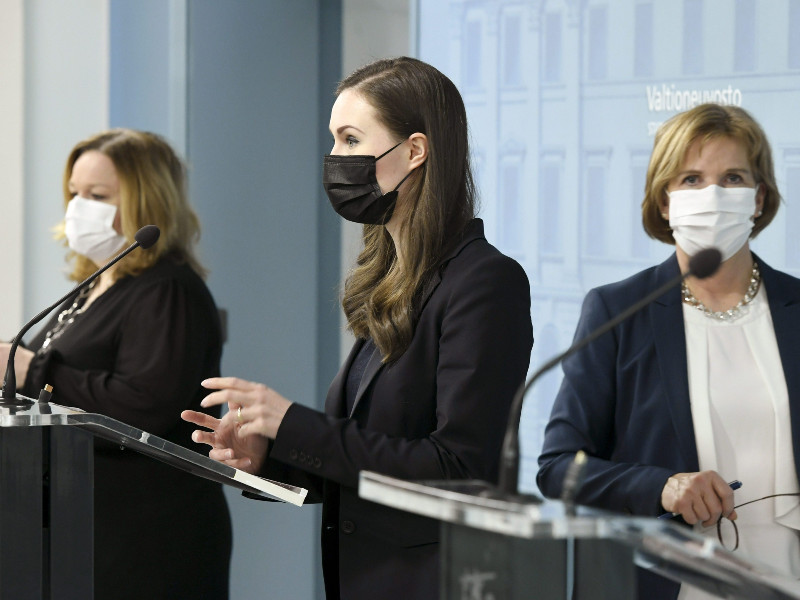 Ministers Krista Kiuru (left), Sanna Marin and Anna-Maja Henriksson held a press conference as the government was preparing to declare a state of emergency in early March 2021. (Heikki Saukkomaa – Lehtikuva)

THE GOVERNMENT of Prime Minister Sanna Marin (SDP) has begun preparatory work to declare a state of emergency and invoke powers set forth in the emergency powers act, several independent sources revealed to Helsingin Sanomat on Wednesday.

The objective of the move is initially to safeguard the functioning of the social and health care system amid a surge in coronavirus infections, rather than to impose additional restrictions.

The surge caused by the highly transmissible omicron variant has already created local labour shortages in not only social and health care but also elderly care. The number of infections is expected to continue growing in the coming weeks, placing a possibly overwhelming burden on hospitals in the worst-affected regions.

Helsingin Sanomat on Wednesday underlined that no decisions on the matter have yet been made. The ministerial working group in charge of managing the epidemic is set to discuss the matter later this week or next week.

The government, it wrote, is mulling over invoking at least sections 86 and 88 of the emergency powers act to obligate municipal and private social and health care providers to re-align their operations according to instructions from the Ministry of Social Affairs and Health and Regional State Administrative Agencies (AVI). The latter section, for example, could be invoked to grant municipalities the right to deviate from the time limits set for non-urgent care in order to provide urgent care.

Also YLE reported yesterday that sources within the government have confirmed that the preparations are underway.

The Ministry of Social Affairs has a key role in the preparatory work, although several other ministries have also been asked to assess whether any of the powers laid down in the act are necessary, according to Helsingin Sanomat.

The Finnish government must declare a state of emergency with the president of the republic before issuing a presidential decree to invoke emergency powers for a fixed period not exceeding a year. The Parliament must then decide whether the decree should be adopted as such or whether it should be repealed partly or fully and whether it should remain in force for the entire proposed period.

The government may not start wielding the powers until receiving the parliamentary approval.

The act stipulates that the powers can only be invoked in circumstances where the ordinary powers of authorities are insufficient and only if the measures are deemed necessary and proportionate to achieve its objectives.

The objectives include securing the livelihood of the population and maintaining legal order and constitutional and human rights in states of emergency.