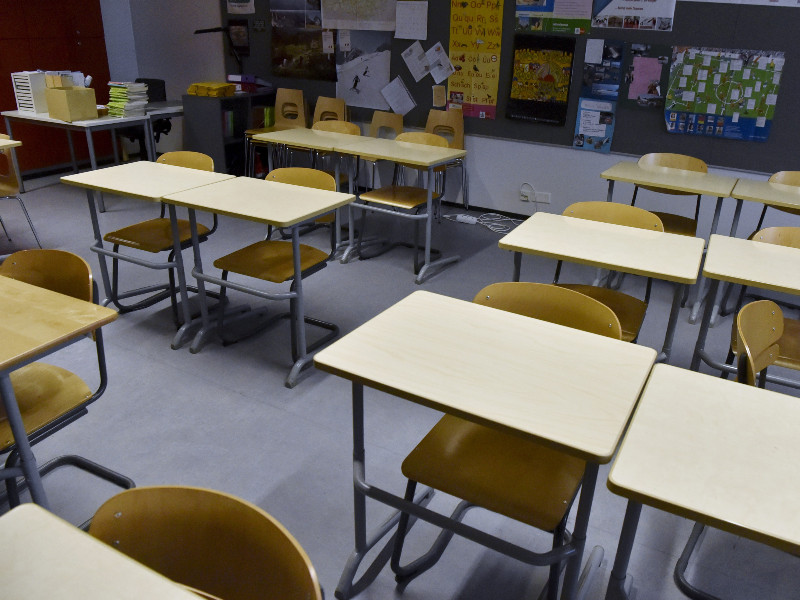 An empty classroom in Helsinki on 2 March 2020. (Jussi Nukari – Lehtikuva)

THE QUARANTINE and testing guidelines presented to schools last week have been criticised and widely rejected as ineffective and unfeasible.

Minister of Family Affairs and Social Services Krista Kiuru (SDP) on Friday revealed that the government is encouraging regional authorities to order entire classes into quarantine even if only a single pupil has tested positive for Covid-19.

“Placing classes into quarantine isn’t possible,” Teija Puhto, the chief physician in charge of infectious diseases at Oulu University Hospital, stated to Helsingin Sanomat. “You’d basically have to call the parent of every child to do so. Anyone who tests positive receives a call at this moment, but even that’s taking 10 days. If you’d also have to call 30 others, common sense should tell you that it’s a pretty senseless idea.”

Entire classes have not been placed in quarantine for quite a while in Pirkanmaa, told Jaana Syrjänen, the chief physician of the infectious diseases unit at Tampere University Hospital.

“We don’t expect that we’ll be changing that practice at this point,” she stated to the newspaper. “Tracing work and quarantine measures have already lost their significance in an epidemiological situation like this.”

Otto Helve, a chief physician at the Finnish Institute for Health and Welfare (THL), on Monday told YLE that the measures proposed by the government – the low-threshold quarantines and twice-weekly self-testing of pupils – are not particularly effective means to manage the epidemic.

“Quarantine protocols like this are practically ineffective when you take into account the fact that schools as an environment are not where the epidemic’s engine is,” he said.

Focusing on children and young people in general, he added, is not terribly important for reducing the number of infections.

Kirsi Varhila, the permanent secretary at the Ministry of Social Affairs and Health, stated to the public broadcasting company that the quarantine guidelines were proposed only as an interim solution – in part due to lack of other alternatives.

“There are experiences from many places that it’s doable. We haven’t proposed it as a permanent solution,” she said.

Helsinki, together with 11 other municipalities in Uusimaa, announced yesterday they have revised their practices for quarantining and tracing the contacts of people who have been exposed to the virus to state that contact tracing should be carried out only in units that house people at risk of severe forms of Covid-19.

Other exposures, such as exposures within a family, school or workplace, will no longer prompt a formal quarantine order, although the exposed are encouraged to reduce the risk of transmission by reducing contact with other people.

Sanna Isosomppi, the chief physician in charge of infectious diseases at the City of Helsinki, reminded Helsingin Sanomat that quarantine decisions are administrative decisions affecting individuals, rather than political decisions. The epidemic, she added, is so rampant that it cannot be stopped by placing asymptomatic people into quarantine, as one can become exposed to the virus anywhere.

“I see no grounds for placing quarantines in Helsinki. A sick child should stay home. That’s the most important thing. And that’s the message we’re trying to get across right now.”