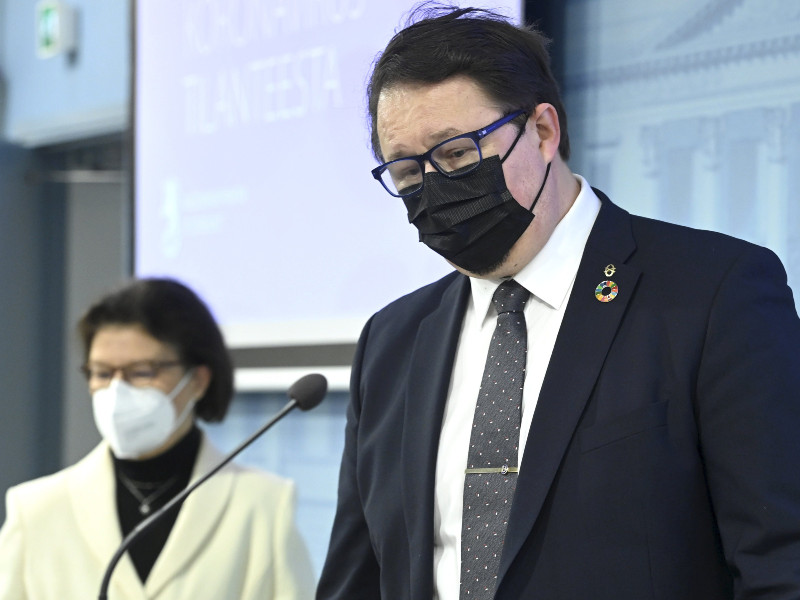 Liisa-Maria Voipio-Pulkki of the Ministry of Social Affairs and Health and Mika Salminen of the Finnish Institute for Health and Welfare provided an update on the coronavirus situation in Finland in Helsinki on Wednesday, 5 January 2022. (Heikki Saukkomaa – Lehtikuva)

THE FINNISH INSTITUTE for Health and Welfare (THL) on Wednesday announced it is proposing that the quarantine and isolation periods for people who have tested positive for the coronavirus be shortened from 10 to 5 days.

“Shortening the quarantine and isolation should be weighed up with an emphasis on an immediate and complete voluntary five-day isolation after the onset of symptoms,” its press release reads.

The need to shorten the quarantine period is not as pressing for unvaccinated because the incubation period, as well as consequently the transmission period, is notably shorter for the omicron variant than previous variants, viewed Mika Salminen, the director of health security at THL.

“The duration has been estimated at two days [for omicron], about three days for delta and four or five days for the original coronavirus,” he was quoted as saying in a news conference on Wednesday by Helsingin Sanomat.

Finland is currently home to roughly 600,000 over 20-year-old people who have at most received a single vaccine injection. Although the testing rates have remained somewhat unchanged after 6 December, the share of positive tests has increased substantially in the past month. In the Hospital District of Helsinki and Uusimaa (HUS), for example, around half of the tests are coming back positive.

Salminen underscored that employers should be flexible in the prevalent epidemiological situation and not demand that anyone with symptoms who is waiting for a formal quarantine order come to work, given that the quarantine system has failed to keep step with the rapidly spreading omicron variant.

Over 38,000 new infections were detected in the last week of 2021, signalling a nearly 100-per-cent jump from the previous week.

“It’d be smart if also employers were flexible. And we know that many employers have been.”

THL on Wednesday also proposed that the priority placed on tracing all infections is reconsidered especially in regards to people who have been vaccinated and who have no underlying medical conditions. The priority should instead be shifted toward increasing hospital capacity, provision of quality care and administering third vaccine injections.

“It’s our opinion that the resources should be directed elsewhere because of the burden on testing and tracing and because of overall impact,” said Markku Tervahauta, the director at THL.

The proposals are part of a statement presented to the Office of the Prime Minister and the Ministry of Social Affairs and Health on Wednesday.