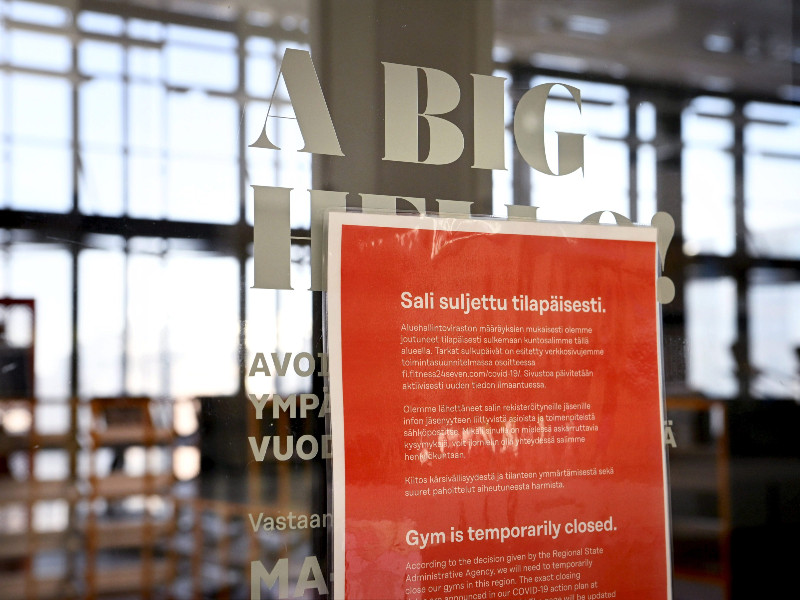 A temporary closure sign on the door of an empty gym in the Mall of Tripla in Helsinki on 1 April 2021. (Antti Aimo-Koivisto – Lehtikuva)

GYMS and other facilities for individual sports and exercise are allowed to open their doors in North Ostrobothnia, according to an interlocutory judgement issued on Thursday by the Administrative Court of North Ostrobothnia.

Various public and customer spaces had been ordered to shut down until month-end on grounds of the epidemiological situation by the Regional State Administrative Agency (AVI) for Northern Finland.

The interlocutory judgement to lift the order pertains to two pending appeals that draw attention to the risk assessments of different kinds of events and facilities conducted by the Finnish Institute for Health and Welfare (THL). Indoor spaces for individual sports and exercise, the judgement observed, have been given a risk score of one, indicating that they pose only a low risk of transmission.

Kuntokeskus Liikku, the gym chain behind one of the appeals, has voiced its satisfaction with the judgement, viewing that the shutdowns of gyms have not had a major impact on the epidemiological situation.

“We haven’t really had any infections in gyms so far either,” Johanna Riihijärvi, the managing director of Kuntokeskus Liikku, told Helsingin Sanomat on Thursday.

The interlocutory judgement applies only to the shutdown order that is in force until 31 December. Kuntokeskus Liikku has submitted an appeal also against the order to extend the shutdown until 15 January, expecting the administrative court to arrive at the same conclusion.

The judgement has also kindled interest in other sectors.

Riku Kallioniemi, the chief executive of the top-tier ice hockey league in Finland, Liiga, said to Helsingin Sanomat that league clubs are monitoring with interest the decisions administrative courts make in regards to gyms.

“We’ve had discussions with the clubs and we’re monitoring the situation for the time being. I’m sure we’ll investigate carefully whether the shutdown orders should be looked into more carefully also as far as we’re concerned,” he commented.

Although both gyms and public events with assigned seating are classified as low-risk in terms of the risk of transmission, gyms are regarded as customer facilities and league games as public events, reminded Helsingin Sanomat. Kallioniemi declined to speculate on whether the difference is of significance judicially.

Oona Mölsä, a senior inspector at AVI for Southern Finland, said the agency is examining the possible implications of the judgement on its existing and future orders.