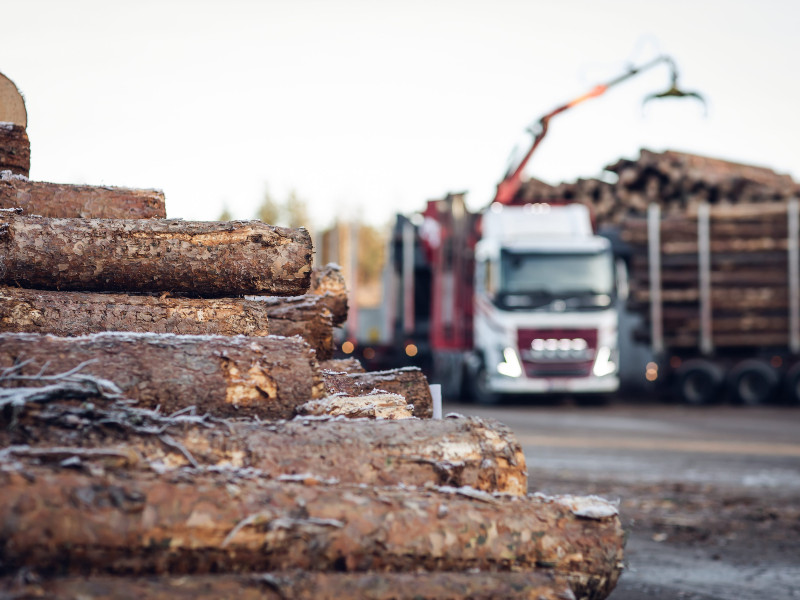 A logging lorry at the production facility of Keitele Group in Keitele, Eastern Finland, in November 2018. (Handout – Keitele Group)

THE INDUSTRIAL UNION on Wednesday presented a strike warning to Keitele Group, a roughly 550-employee wood processing company based in Keitele, Eastern Finland.

The three-week strike is scheduled to begin on 13 January.

“We have repeatedly pleaded with the management of the company not to undercut the terms, conditions and rights of its employees but to negotiate these fairly with the employee representative,” stated Riku Aalto, the chairperson of the Industrial Union. “These pleas have fallen on deaf ears.”

He described the situation as exceptionally inflammatory.

Ilkka Kylävainio, the board chairperson at Keitele Group, insists that the company is under no obligation to negotiate the terms and conditions with the 200,000-member union, as it only a small share of its employees are members. The Industrial Union, in turn, has stated that the union membership rate is over 50 per cent.

“The Industrial Union wants to make use of a small minority to represent the whole staff. We have on obligation to negotiate with them,” Kylävainio said to Helsingin Sanomat on Tuesday.

He also viewed that the dispute stems not from attempts to adjust the terms and conditions of employment but rather the union’s desire to wield power.

According to the Industrial Union, Keitele Group has labelled the terms and conditions it is adopting next year as confidential, blocking their discussion with third parties. The union has consequently offered the employees an opportunity to check their employment contract and its terms and conditions anonymously.

“All employees have the right to resort to the help of a trade union, and employers cannot dilute or dictate away this right,” said Aalto.

The dispute has led to a one-day work transport-worker strike at ports across Finland. Ismo Kokko, the chairperson of the Transport Workers’ Union (AKT), told YLE on Wednesday that employees are presently fighting for their constitutional rights.

“We’re living in times that’ll decide whether we’ll have the right to organise and dispute in Finland.”

The work stoppage, which brought the movement of goods at ports to a complete halt, is about more than a protest against Keitele Group, stressed Kokko. “Employers have chosen to pull away from bargaining, primarily in the forest industry. Their next step is trying to find an obstacle to the employee right to organise and dispute. That’s the bigger principle at hand here.”

A local labour dispute having an impact on ports across the country is yet another indication of the antiquated nature of labour laws in Finland, viewed Ilkka Oksala, the director at the Confederation of Finnish Industries (EK). The stoppage, he highlighted, prevented the handling of roughly 350 million euros worth of goods on Tuesday.

“It’s absolutely incredulous that as a consequence of a labour dispute involving one company all Finnish ports are shut down and our foreign trade is stopped,” he said to the public broadcaster.