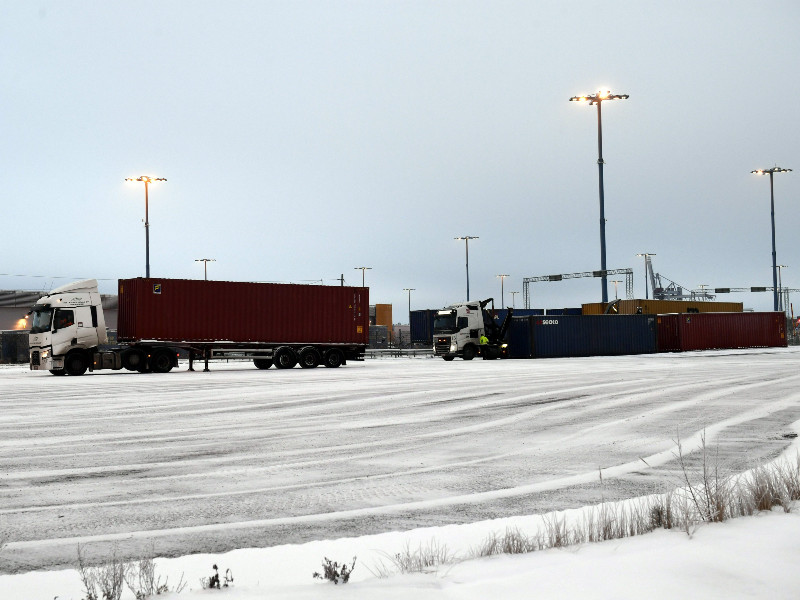 Lorries at the Port of Vuosaari in Helsinki on 28 December 2021. Transport Workers’ Union (AKT) on Tuesday initiated a day-long sympathy strike that brought the movement of goods to a halt at ports across Finland. (Emmi Korhonen – Lehtikuva)

A WORK STOPPAGE by the Transport Workers’ Union (AKT) brought the movement of goods to a screeching halt at ports across Finland on Tuesday.

“All work in port areas has stopped. No goods are being received, no arriving trains are being unloaded, and neither lorries nor ships are being loaded or unloaded,” Jari Immonen, the chief executive of Steveco, stated to STT on Tuesday.

Steveco has port terminals in Helsinki and Kotka.

Immonen highlighted to the news agency that the work stoppage was organised at a particularly difficult time, as ports already have a container backlog following the holidays and as next week will not be a full work week because of Epiphany.

“It’ll take time for the situation to normalise. It won’t happen in a couple of days.”

AKT on Monday announced its members covered by the collective bargaining agreement for stevedores and port operators will not work for a day in an expression of solidarity to the Industrial Union, which is embroiled in a labour dispute with Keitele Group. The Industrial Union earlier this month instituted a work boycott and overtime ban on the sites of the mechanical wood processing company, accusing it of reluctance to open company-specific collective bargaining talks.

Members of AKT have refused to handle the goods of Keitele Group at Finnish ports since Tuesday, 21 December. The District Court of Helsinki on Thursday ordered the trade union to cease the boycott under the threat of a one-million-euro fine, later dismissing the subsequent appeal from AKT.

AKT on Monday argued that its work stoppage is justified because of attempts to break its boycott at the Port of Valko in Loviisa.

Finnish Forest Industries said in a press release that the stoppage will cause significant export revenue losses, describing the actions of the trade union as “irresponsible” and their consequences as “disproportionate”.

“Disrupting the transport of exports causes not only temporary harm, but at worst it can lead to production stoppages and dent the reputation of reliable suppliers among clients,” said Jyrki Peisa, the director at Finnish Forest Industries.

The Confederation of Finnish Industries (EK) estimated that the stoppage is targeted at companies that are in no way involved with the labour dispute at hand.

“The move demonstrates the weakness of our country’s industrial peace legislation. Almost all of our country’s foreign trade is stopped as a consequence of a labour dispute involving one company,” the employer organisation lamented in a release.